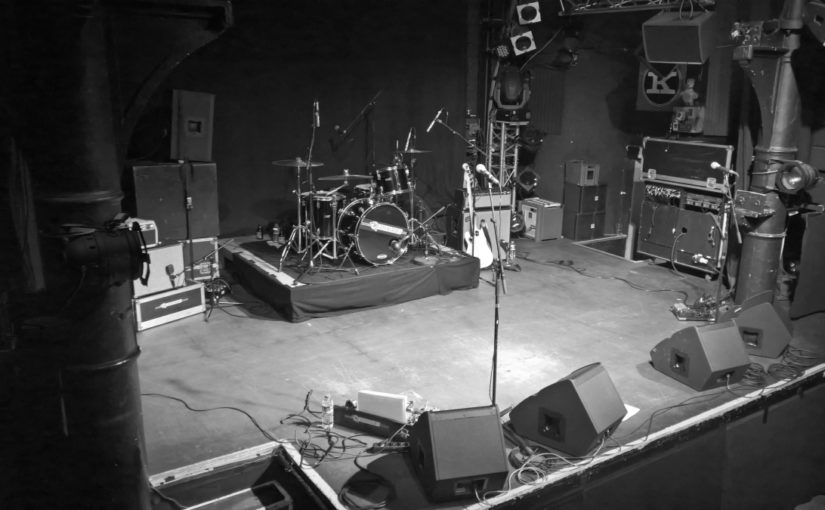 I am actually sold on them, especially when they venture into “hard & fast” territory and i have to admit that i am blown away by the sounds that Rob Razorblade get’s out of his guitar. And the speed by which he moves from one sound to the other – just stunning.

Next to punk rock there is only one style that touches my musickal senses in the same way – surf. I always adored the sun, the beach, the waves and the surf – anywhere, anytime. And Surf Music (and Surf Core or Surf Punk) has always been a mainstay. Sure fueled by bands from sunny California that did mix this, by bands like Man … or Astroman? or just  by the many traditional bands that perfected guitar play and sound effects. Still – i am seeing way to few shows with good surf bands. So when The Razorblades graced Hamburg it was a must – especially as they blend Surf and Punk almost perfectly. But by the looks all og Hamburg was out surfing with the two slick girls above – upstairs at the Hafenklang exact only 37 People (incl. bands and friends, Venue staff and audience) wanted to seek wind, wave and sun. Sad actually.

The Tyhpoons not from Hamburg but from Schulau (and insider joke you do not need to get) play a traditional type of surf, i’d say Dick Dale style (but i am not an expert) – but they miss out on the most important thing for a live band: All 5 looked different, behaved different and just looked odd on stage. If you close your eyes it works, if you see them – it does not. Nevertheless some great tunes, covers and originals, and some realy neat guitar work from their main men (the only one with a fitting Gretsch and a fitting outfit). Due to the lack of audience not really making an impact…the tough life of the support stint again!

They have it. And they hail from Wiesbaden – miles away from the next beach and surf. For more than 10 years now the play up and down Germany, Europe and even the US. And they are tight, together and technically gifted. And they have not only perfected the look (incl. “team” T-Shirts), stage roles and movements and stage personas.

It took them 15 minutes to set up and kick off – brilliant. That’s self confidence paired with ability, i’d wish more bands can do that. From there it was non-stop speed, fund and great tunes including a clever cover of “Love will tear us apart”. And, in full ignorance of the empty place, just a professional show with all elements that go with it incl. getting people onto the stage. And Rob Razorblade used the empty pit to jump from stage and play F2F with the few people in the audience, making the best out of it.

I’d love to see them in a packed place with some great Ramones-core and Hardcore bands like Night Birds – that would be a match made in heaven (and would give them enough credit). So listen up for a final tune:

Note to self: I need to make sure i look out for more Surf shows! Hope you do the same – surf up, motherfucker!