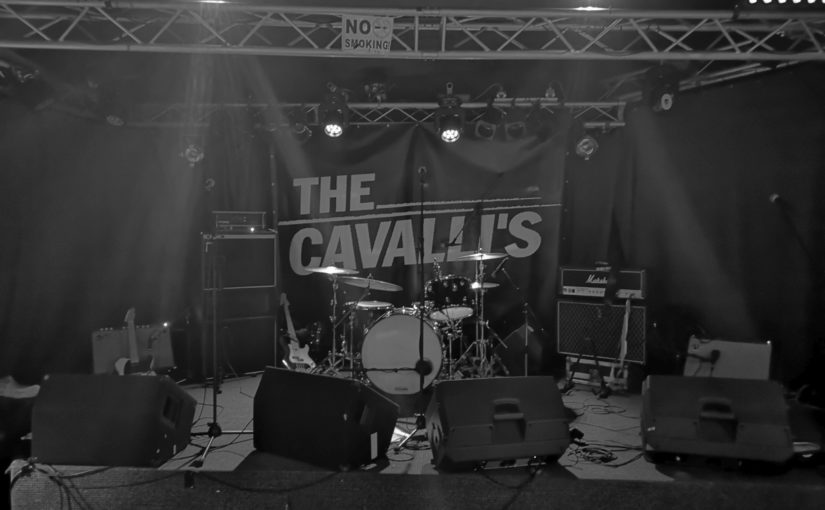 I don’t recall how i stumbled across Hola Ghost (from sunny DK) but it has been a while ago. And ever since i was either yearning to see them come to Hamburg or trying persuade my favorite clubs to book them. As such i was happy as a fuck when the Monkeys took them on and stopped worrying about attending Ruts DC and The Stranglers at the Fabrik – i had a much better option for the Friday!

The support was from less sunny Dutchistan, The Cavallis where not really a fit for Hola Ghost but a fit for the Monkeys. A tall bass in the middle, a sturdy drummer in the back and two guitars: One without hair and solid rhythm, the other with loads of hair and quite some neat licks and stuff (and some stunning reverb stuff later).

The claim to play Punk ‘n Roll, something that is not really easy to define. I would put them spot between Pub Rock, Power Pop, Rock and … early Punk. They sing in English and most of the songs seem to have been about Girls and Love. And they sounded like this:

They got some appreciation but the audience was more in a Ghost mode. They tried to make up for that by penetrating their names – more than twice the band members where introduced. Nice running gag. They totally surprised me when they played a Surf song and that in perfect style. So for me it dipped to “good”, other noted “so lala”. As ever – the hardship of support.

Next on Hola Ghost and they where greeted with some cheers by the now say half filled Monkeys. And they took residence like this:

Great visuals, great horn section and great sound overall. And different and as such quite interesting. Some people call it Mexican Death-Surf, some call it Death Psychobilly – for me it is Scandinavian B-Movie Mariachi Rock. Gringo style. And from the mu-sick-al perspective they cover all sections: From slow burial marches all the way to high speed Lemmy tributes (that would fit any Motörhead album).

And within that they have both feet in the stuff like adore most, thus they also have a Rancid song in their rooster:

The audience was very cheerful, some where even totally surprised. Me mate Frosch had friends from England over (Hola Jay, hola Andrea) and took them along based on my advise (and nicely handing the blame to me if this would have gone pear-shaped) and they too where taken by surprise and joined the fan club.

For me it was exactly what i thought it would be, those songs i knew i could mumble along to, other i could simply enjoy. This song nicely sums it up: Slow, fast, horns, great singing, great variations … i think these 5+ minutes have it all…

I am sold on Hola Ghost and i would love to see them on a bigger stage and in front of a surprised full house in Hamburg. In front of an audience that had no clue what would be coming down on them … great idea! For a start i would be happy if the just come again.

Big fanx to the Monkeys for taking them on in parallel to a sold out Stranglers show next door. Luckily some regulars that attended at the Fabrik came over to have a view drinks at the Monkeys, for me that resulted in a well loaded status, carrying two 10″ and a shirt home and a late but happy drop into me bed next to me love (that claimed the shirt).