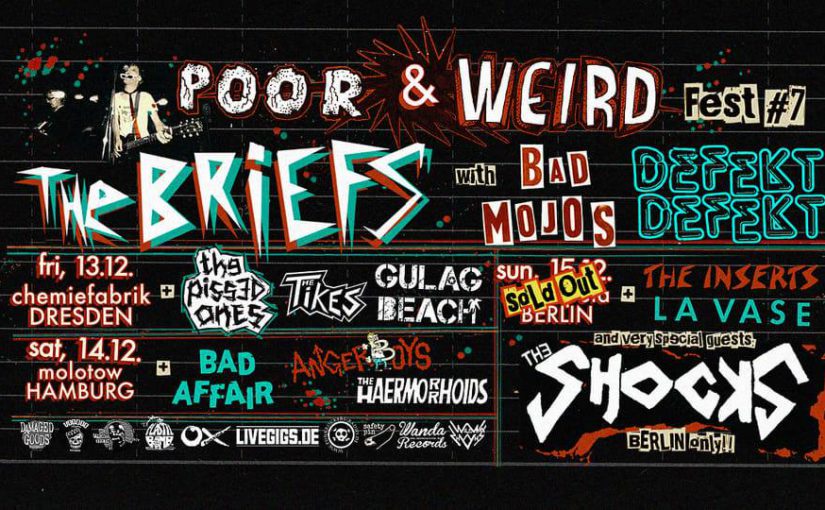 Already the 7th edition of this poor mans travelling circus, this time with The Briefs as headliner (and – wild guess – name giver). Location was to be the Molotow, which is for me always something … dunno … painful. Like some others i never got warm with their new location (and layout) at the bottom end of the Reeperbahn.

Kick off was very early and with the Anger Boys from sunny Recklinghausen. The classify themselves as „weird n‘ nervous hardcore punk!“ and they come across as short bursts of sometimes structured and sometime less structured noise topped with some very capable female vocals.

They had like a 20 minute blast into a largely empty room (once they had sorted some bass amp signal issues) and they indeed did surprise me. I will definitely check out their demo and for sure i will give them another chance (on a different stage hopefully).

With a very quick changeover Bad Affair from Hamburg took the stage and they too surprised me. I saw them in April and boy have they improved since then. I would not even know where to start …

… i guess key item is that they have balanced singing and guitar and that they have been able to pen down some really good songwriting: Complex where needed, powerful and with a real drive. I will definitively watch out for more, time being you will need to resort to their demo (as the last 6 tapes did sell out on that night, or?). Good stuff and again female fronted … something that unfortunately did not last through the proceedings.

Local heroes The Haermorrhoids claimed the stage next and they have by now perfected both their setup and how they deliver:

Tick for stage attire. Tick for in-sync movements of Guitar and Bass. Tick Tick Tick for being solid, together, tight – just class. Can’t phrase it different. The sound though at the Molotow was less than perfect – i’d love to see on the perfect stage, with the perfect sound system and the perfect sound man. That’ll be fun!

The Molotow by now was well filled and sure their fan base was front row and cheering. If i noted correctly they have just come back from a short tour in Italy, so it was really a well oiled machine – delivering new songs and classics like this one from their debut record:

Boy do i look forward to the next album. And please do surprise me by having it recorded at Sonic Iguana and produced by Mass Giorgini or – if easier – record and produce it at the Blasting Room. Bang! That would put you and Hamburg on the map. Big time.

Class set as ever, quick, fast – no fills.

Next on from those alpine meadows of Switzerland the Bad Mojos. They took off where them Haermorrhoids left it: Fast paced and sunny one minute blasts of fun and joy. And they also knew that it take formal stage attire to be successful – so they dressed up for the occasion.

Nice cheap mans space outfit? Or sweat-suits as they have to make weight? What ever, it nicely fitted and gave their set the visual perfection that matched the music.

And another big surprise, as they got me left-field: I thought i have seen them before at a Get!Lost!Fest! but they did not impress me – now their less than 2 minutes blasts just sounded perfect.

And these blasts are lightweight high speed punk hymns with a strong fuck you anyway empathy, as expressed in their current record:

They were forced to play an encore (despite the running order not allowing for it) and gave an ode to Ian Stuart and safe car driving – indeed a perfect poor and weird extra! Well done lads!

With so much fun and high speed blasts it was time for something different. And something different we got: UK ’79 – ’81 (surprisingly the name of their recent effort) was the theme and the age of the musicians was slightly older than what we had seen before.

They hail from Bremen, have an English contingent and mix their string duties: Mid way bass and guitar swooped duties and with that also slightly changed the sound.

At the start it sound „hard mod„, later it sounded definitely like something i heard back then via John Peel on BFBS (and relentlessly taped it). They sing in German, in English and i believe i heard another language on top.

Great stuff, excellent musicians but … stage attired could be improved if you ask me. But to me they turned out as the biggest surprise: I tend to ignore Bremen where i can (for all sorts of bad reasons), so i did not catch them prior. Great set and towards a packed house by now.

It all felt rushed, or, in a positive way, without delays. Reason must be that the Molotow wanted to max turnover/turnaround on that Friday, ie. the live music should be over by 23:00 so that they can fill the club with entertainment seeking youth („suburban hipsters“ as someone pointed out).

Headlining thus came fast and furious … and from The Briefs – still one of the most entertaining party machines around. They conquered the Monkeys last December and they conquered indeed the packed Molotow this December.

All singing, all dancing and a huge number of smiles in the faces of the good people attending. Whilst on stage it was sans the female element in front of the stage a notable number of female enjoyed it and danced away. To get you into the mood spin the video and sing-a-long:

Steve and Daniel on Guitar, Chris on Drums and Pascal on Bass – did anyone actually realize that this makes the Briefs a 50% German band? Chris lives here and Pascal is German. Great to claim such a great band!

Once done the audience demand more and screwing the set timeline they embarked on a couple of songs encore, including their own little self-assessment of them as Americans:

Classic and actually no surprise. But how nicely it all fitted together over 6 bands and how great the tight schedule worked to give the audience a non-stop enjoyment from 18:30 to 23:15 – wow! And for the The Briefs the surprise i would like to see is … get them to cover the first two The Boys records!

Surprisingly good entertainment on a Saturday evening in December, at a location that just does not resonate with as much as the bands resonated with me.

Great travelling circus and by no means poor entertainment and weird music – i hope this now gets a firm annual repeat! 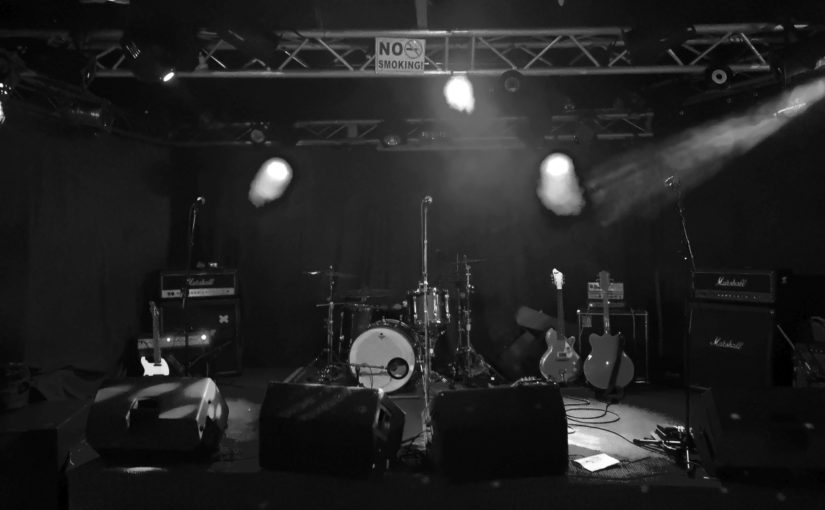