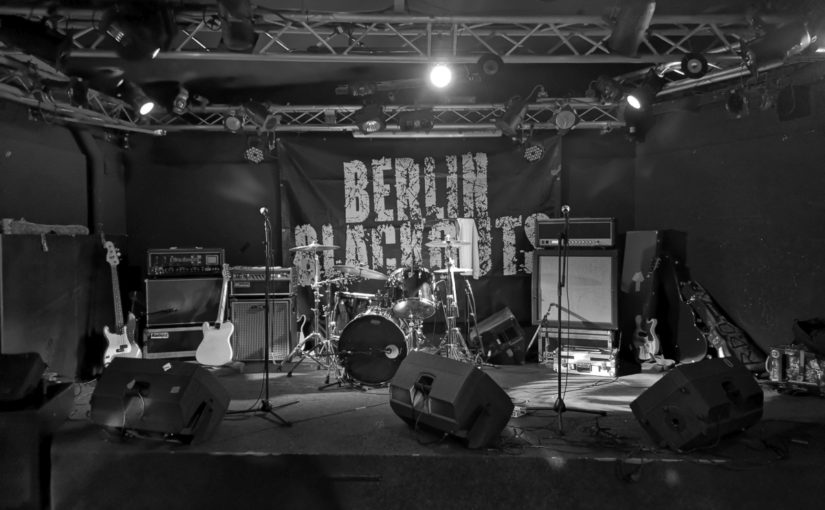 Cock Sparrer on a European Club Tour – that was a good enough reason for the Monkeys to put together a little warm up (though i would rather guess it was supposed to be a stocking up of liquids or training ground on beer consumption for many).

The mix was great: Berlin Blackouts with a Cock Sparrer like chorus quality and The Angry Agenda a solid Oi! street credibility.

First on the Blackouts (from Berlin, indeed) and whilst on social media it was like 156 people interested in the event the turnout was … i guess not more than 50. And most of them rather into the Oi! side of things, so the Berlin Blackouts had to face a rather empty dance floor.

Since i saw them last time (2015, support slot for Bishops Green) they have shrunk to a 3 piece but without loosing too much. Actually, in my ears, they gained tightness and a bit more vocal diversity. What they do they to perfect and their sound indeed is so pleasant that sometimes i miss the edges. For some it also contained too much of whoahoah in he male vocals  but hey – that’s his way of singing.

For playing a mere 20 people in front of the stage they did a solid performance and they should be back in front of many more people all geared for some sing-a-long punk. That would give them what they deserve. And more people would also improve sound, without bodies to break the sound it had a bit of an empty closet type of sound.

Actually one member in the audience spotted a point here and noted „… i think we had more people in the rehearsal room back then at times than they have here„.

With just a little bit of changeover it was then time for Watfords finest: The Angry Agenda. They are around since 2011 and they had put a heavy marker with their first 12“ „Here comes trouble„, a record full of angry  barrages.

Whilst all that anger seemed to manifest itself in the front man (actually, a real Rampen-Sau as we say in German) the rest of the band was quiet (and almost shy) in the background.

Indeed they have it: The backline delivers a rock solid Oi! with an emphasis on Rock: They got more of that Motörhead or Rose Tattoo sound than of almost pop like guitar works of Cock Sparrer. And they have a loudmouth on vocals who has a story to tell – in every fucking song.

To me that was the one item that made them stand out actually – they seem not to have songs but go back to old tradition of story telling in the pub (with a bit of fitting mu-sick in the backdrop). Quite unique and very much ok with me (though i would not do every effort to see them).

They had more people in front of the stage, they had a bit of dancing but in the end of the day they too suffered from the rather low turnout.

With them done people resorted either to more beer or went home. As i was to let go Cock Sparrer at the Knust for many reasons i had a final one for the road and did hit home.

Those who love Cock Sparrer, a pint and some more i am led to believe had fun over at the Knust the next day, though local news papers seem to make a bit of a fuzz about a full blown riot (and some football rivalry) – i hear it was less of that but some unjustified violence did occur. Nevermind, that was only the 3rd reason to let that one go by…