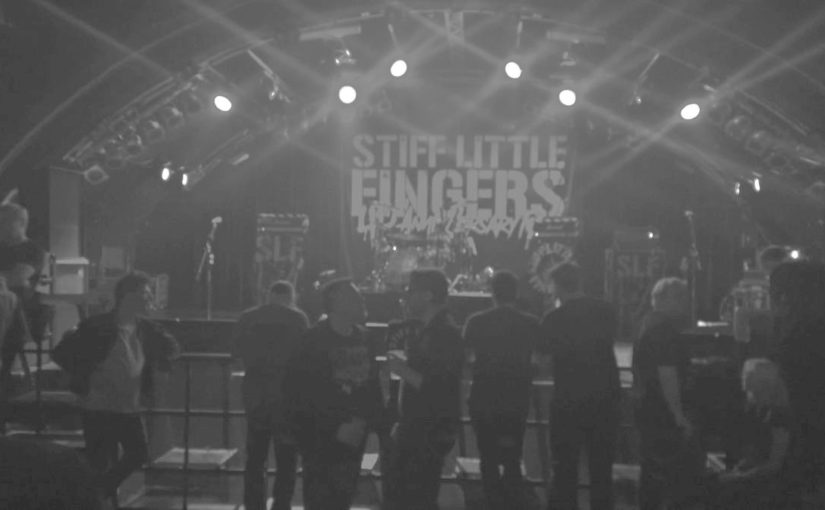 It was 1980 and all of the punks in Hamburg had been blown away by Stiff Little Fingers debut album „Inflammable Material“ that came out in 1979 that – according to some – made Punk worthwhile again.

For me in Hamburg it was me 16th Birthday and SLF played only for me. At least i’d like to think so.

I do not really remember the detailed sound but recollection of many was that it was shite. A rather poor tape bootleg exists that seems to confirm it. And on top they have been referred to „cool stars“ rather than approachable punks. It may or may not have added to the shit storm The Clash got a month later, same stage. My regular Fanzine back then (regular as published by school mates) did report it as such:

Now fast forward to 2017 and 37 years later me is still there and an incarnation of SLF is also still there. The punk SLF existed from 1977 to 1983 and their first four LP’s (Inflammable Material, Nobody’s Heroes, Hanx! and Got for It) are just killer material. When they released „Now then“ in 1983 they folded and only ever came back … different.

What was not different was the packed Markthalle – back then and now. It came much as a surprise, the last few times they played at the Knust, which is only 1/3 of the capacity. But next to their punk roots they are nowadays a bit of an Irish Rock legend and well known beyond punk nostalgia. And, fun fact, plenty of Northern Irish fans took cheap flights from Manchester to be in Hamburg.

They kicked off with a variety of songs and made it known upfront that they where to play a wee bit longer than normal, given it was their 40th anniversary tour. What was clear from the start was the simple fact that whatever sound they play (and the sure leaned more to the rock side) it was carried by the excellent and unique voice of Jake Burns. And i’ll guess he has worked a lot on his voice – it is perfect singing by now (back then it was harsher and sure fitting the time, the anger and the songs).

In the later part of the set they also delivered to their punk roots and more people got dancing on the dance floor. Less people compared to the Undertones last year but them Undertones are sure the better party band (period). SLF delivered their message loud and clear up to and including nods like this one – to the one and only Mr. Strummer:

By now we were clearly over the 1h30m mark and they kept going. And thus it was time to give the crowd what the crowd wanted (at least those aged greedy bastards like my humble self). So here is my loveliest Stiff Little Fingers song in the 2017 live edition:

Yep, that one was ok. Actually it was to my liking. And the message that is carried is not lost these days, let’s be frank – it is a message oh so true nowadays too.

And like every SLF show the final bit was their plea for an Alternative Ulster, something they may or may no have today (some things are better up there, some things appear to be the same old shit) and that might be at risk from that thingy called Brexit. And frank – i can make out that riff amongst anything and would be able to identify the song, it is a killer one!

So as a fond memory and a loud message from the past remaining not only valid but also relevant here is … Alternative Ulster 2017:

And that was almost 2 hours of SLF, on a perfect spring Friday, delivered as a rock show. And there ain’t nothing bad with that at all – if you want to see something fresher, wilder and … whatever then you gotta go somewhere else. If you are happy to see a Northern Irish rock band that has messages and developed to something that covers much broader territory – then SLF is for you.

And the sold out house did applaud them and gave them a big HANX!

Some people complained about the ticket price, i think the 12 DM from 1980 (unbelievable 6€ if you just do the simple currency math – in reality it compares to 37€ if you take inflation, buying power and and and into it) was cheap by the sound but not really for me as a young school boy trying to see as many shows as possible (and boy had we shows back then).

I was relieved from these cost and could spend the money rather on fuel aka booze, both because of that little Top Trump business called Keressinho and of SLF, as they got me in for free thanks to my translation job in the most recent UK Punk edition.

And booze was needed too because we did watch the painful loss of St. Pauli away at Aue at the Dschungel prior to the show – something so painful (and pulling us back down) that it needed counter beer (or harder stuff).

Where people happy? Yes, until after midnight people stayed at the Markthalle, listened to DJ Tiki Boy playing old punk singles and talked – many faces that where young and fresh in 1980 where there in 2017 too and it was literally the equivalent of an old school class meeting.

And, full disclosure, i was a VIP for that show. I guess that was thanks to my 16th birthday back then.

NB: I used the term rock band a lot, eh? It ain’t bad mouthing or else it just ensures that you get the setting right. And the setting includes that Jack is a very very gifted musician.

Just look at this effort from 1994, also released as Stiff Little Fingers. It is not only a great song but also carries lyrics that yet again are still relevant today. And is where you have to accept that style and looks might change but what someone is never changes. And for that due respect Jake!

Just to make sure you get it though Jake sings it pretty clear- here are the lyrics: 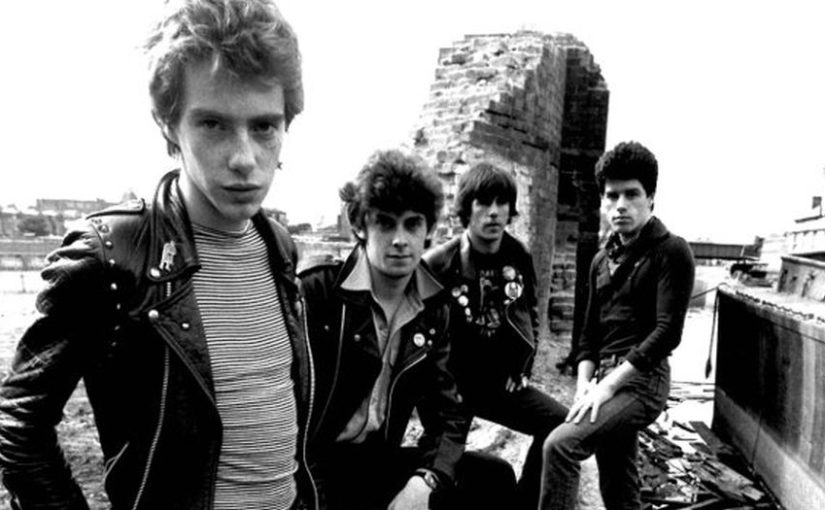