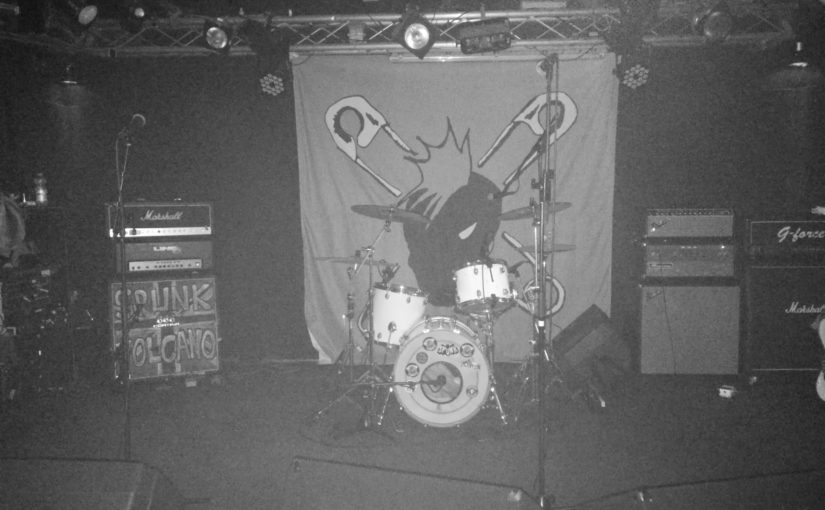 In October Dirt Box Disco and Wonk Unit packed the Monkeys and provided utmost fun to the Hamburg lot. The same lot was expected to show up on this lovely Friday, both because it was TGIF and it was Spunk Vulcano and his band (and Spunk is the main force behind all songwriting in DBD i was told).

On top it was the first home appearance for Christane as the stand-in for Erwin with the Razors. But all of that did not lure people down to the Monkeys – i guess it was a mere 75 people who showed up, including some who looked like they had tried the sold out Talco show at the Fabrik 300 meters up the road and did not get a ticket.

First on Razors and with the big burden of Old Erwin still in battle with the big fucking C, something that everybody wishes him well for. Damn fucking C. For him Christiane freed herself up from Gerd duties despite the fact that Gerd had another headlining gig the next day. Was the feel different? Sound wise not but sure thing there where more smiles on stage. And the chorus vocals with a female scent fitted surprisingly well.

The Razors most likely had the better end of the small turnout, as they could claim nearly 100% of the audience as friends. And that is how they took it and did not give in to shorten the set. Whilst all their hit’s provided enough sing-a-long it was again their David Bowie adaption that did send shivers down everyone spine, aptly introduced by Klaus:

And whilst that would have ended the set under normal conditions them Razors had a surprise for Spunk – they had rehearsed a Dirt Box Disco sing-a-long and invited Spunk onto the stage for the encore. And that provided just great fun to all concerned – be it the Razors, be it the lot in front of the stage or be it them Eruptions, who smiled away on the side in front of the stage.

Here it is, in all beauty, as a one time beauty:

That was just perfect and a neat hats off to Dirt Box and Spunk.

Next on Spunk Vulcano, who we all now, and The Eruptions. Them Eruptions looked young and sported more the American way of Punk – both from a visual but also from a sound. So those who feared a DBD-Clone where proven wrong.

It was the same amount of fun in the lyrics (through hard to make out) and it was a different kind of mu-sick-al energy coming down from the stage.

Still, the lot had fun and even a Spunk clone made it into the audience and kept dancing away. Was it as entertaining as Dirt Box Disco? Mhhh, for me not. And i can not even make out why. But what i do know is that leaving that equation aside this was another case of why live mu-sick is to be preferred: I may not buy their records but sure thing i am going to see them live. And it sounded like this youth, listen up:

Spunk finished just short before midnight, leaving some time to have another one for the road with friends and planning more for the weekend.

And those plans where needed, as there was a triple-crown to win: Next to this show the Saturday awaited the lot with Gerd (pushing a show into their busy stadium schedule to make up for the missed Christmas show) and the option for the tripple crown: The Haermorrhoids and DeeCracks (Viennas finest) would grace the Molotow in an after-midnight show. I counted 6 people (including my humble self) that gave into the urge to win that triple crown!