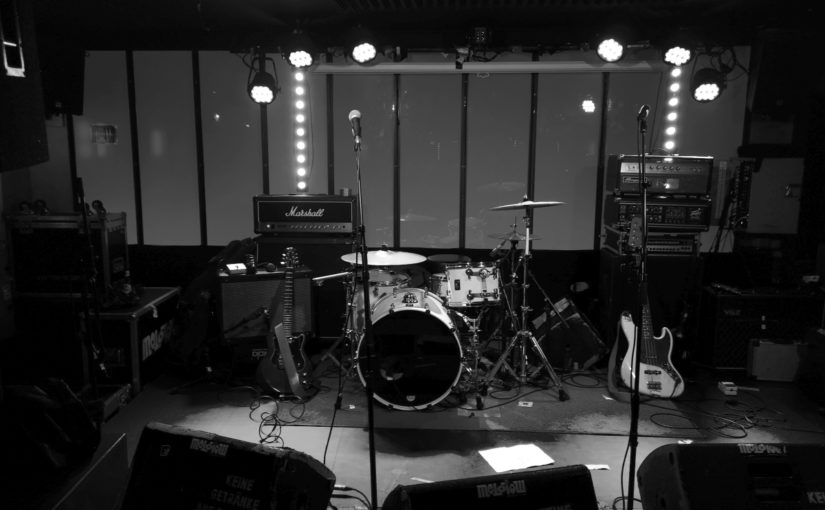 I missed the Get! Lost! Fest last year yet again due to overlap with my annual pilgrimage to Odsherred, so the Poor & Weird fest caught my eye early on … but only when i realized that it was Head from Seattle on the rooster i got really exited. Head, one of the coolest Ramonescore bands and with their early records forever a deep love of mine (and i never caught them live before).

The show was supposed to happen on the main stage of the Molotow but due to the tiny pre-sales (37 tickets if i understood correctly) it was moved up into the Sky Bar (and Lene Lovich took the main stage).

Kick off was early with Hamburgs own Küken and they faced more fellow musicians than paying customers i bet. But that did not stop them to deliver a very tight set, almost feeling like a block of metal: solid, no frills and coming at the audience!

To me still one of the best things Hamburg has to offer and quite off the beaten track with a unique sound. If only they would get a perfect setting in terms of stage, sound and a packed and eager audience. They deserve it.

And they have a great own cupboard to name their style: HARD GUM!

Go and check them out – they are worth it! Only after the event i learned that actually they struggled a bit: They bass player could not travel and was replaced plus their drummer had other touring duties and also had to be replaced – not the best setting but they did show that they have also found their own niche, somewhere next to Guida and more rooted in high energy rock.

First surprise of the night for me, i will definitely check them out in more detail. And yet again another brick in that wall that is spray painted „you got to see bands to learn new sounds„!

Next Slander Tongue from Berlin Neuköln and with that a familiar face from the Get! Lost! circuit. And for me an almost immediate dislike: It took them way to long to get set and the guitar player on the left to me somehow made the impression that he was pissed off by something and was not happy.

The singer had a neat Billy Idol snear but their mu-sick meant nothing to me. Besides making a not happy impression they did have a Buddha like rhythm section of Bass and Drums that carried them along. I have no clue in reality of the working of that band but i would not have been surprised if they had split right in the stage. Sorry, not my thingy.

When the next group, The Scaners from sunny Lyon in France, prepared the stage it started to look different, namely as they setup some electrical stuff: Next to a keyboard with some effects they also mounted a Theremin, which is coolest thing since time travel was invented. The last band i saw with that was Man or Astro-man? and that means an immediate like!

And once they where done they also took on a unique stage uniform and that made them kings of the night by all counts (of mine, sure). And they sounded like this:

Bingo – i did hit jackpot! Scifi Hardcore! I always liked Scifi Surf but paring the theme with fast paced punk from 2077: Just a grand idea and just puuurfect! And speed they had, the songs on their first LP are about 1:something on average and here they packed like 20something songs into their set.

Just a great show with all showmanship ingredients (and details) it needs: The drummer counting into the songs like DeeDee Ramone, the bass player putting the power into the songs, the guitar wandering around and making use of the Theremin with his guitar neck and the singer (with a Michael Jackson glove on one hand) providing the fancy sound from effects.

I did not expect this and i had no clue that such a little niche existed and was actually manned by those boys from France of all places. Now i see a Man or Astro-man? return tour to Germany and them Scaners as support in me brain, i guess i need to start playing lottery to make up the money for that event!

The Scaners got the crowd moving for the first time though it was not more than 50 people (and within that a large contingent from Italy that only ever flew in to see Head). Great Band, great show and indeed a unique kind of fun. You must trust me and check them out, now (or be poor forever)!

And the next surprise followed suit: That Head where a 3 piece by now i knew but when they setup their gear they looked … almost non-descriptive. Evading identification. But it must be Head, as they setup the barest of things: A guitar left, a bass right and the drummer only a bass drum and a snare, paired with two sets of cymbals. No toms whatsoever.

Soundcheck was done by doing three chords and asking the audience „is it loud enough?„, that’s how i expect it from a band with some routine. And they delivered a set that was somehow also surprising, first see for yerself:

I had a bit of an itch, a nagging in the back of my brain and i could not make out what it was until one of me mates asked me „… we have been to shows now for almost 40 years, we have never seen a band with less charisma haven’t we?“ that i realized what itch was nagging me. In some form it was the essence of bare bone, the core of reduction, the … nevermind, it felt strange. It was strange.

What was not strange was the songs, though they had some hick-ups within them (they seemed not fully oiled). The Italian fans in front of the stage where decently loaded and did not mind, they sang away with joy (as i did silently) and had their fists in the air.

Sure thing i took on to get the vinyl on offer: The 2xLP Version of the discography (somehow not needed as i have all stuff on Evil Clown Records from them) and the new German styled tour EP. Neat.

And after Head i was done (and i was not the only one). The day started with a first beer at 12:00 (for a 13:00 home game kick off) and by now had stretched quite far into the night. I decided to stroll home and miss Derv Gordon. Two mates stayed and reported later that it went on to become a bit of party fun with old Equals songs … not sure if it would have been enough for me to sustain further on.

It may have sound like this aka Derv Gordon with So What as backing band:

And that against the original sound from the B/W times (and a funny video from the Bremen Beat Club filmed in the old part of Bremen):

In sum a neat and diverse package that Otis Tours put on the road, it just did hit Hamburg on the wrong day (against shows in every other club in town) and thus with a tiny turnout (and a loss for those putting it on). I can only forever urge people to come out and try something – there may be surprises friends, just like on this Poor & Weird Fest!