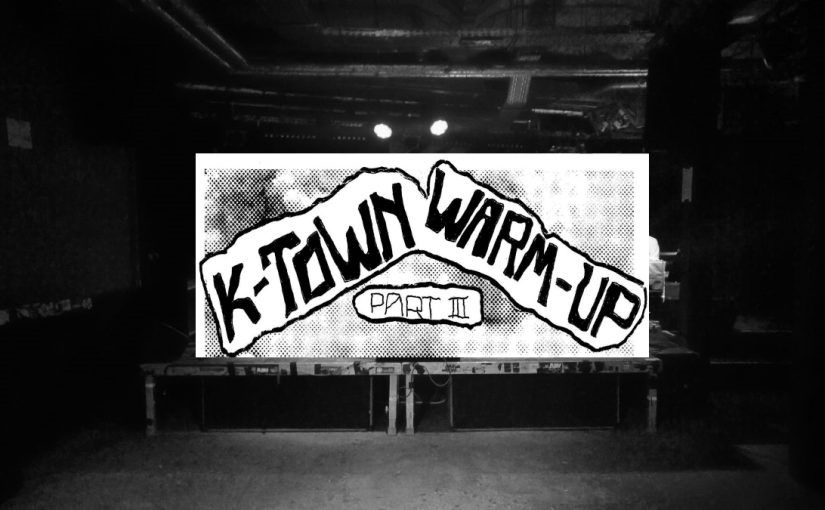 Hamburg is gifted. Gifted with all sorts of things but sure thing with location, location, location. So bands playing K-Town Hardcore in København can do a nice stopover in Hamburg and that tradition is now in the 3rd year. And yet again a bargain, 12€ for 6 bands is a treat. And as the Hafenklang can serve two stages the changeover is quick, smart and allows the bands to play a wee bit longer.

Start was with Eel from sunny Pittsburgh, PA – a lot that seems to have sucked up the japanese version of H/C. Fast, hard and with loads of screaming. Fun fact: The singer of Eels did dance through the sets of all the other bands, stage-diving included and generally enjoyed himself to the max – nice one!

Great start, though the Hafenklang still was rather empty – people just do not like a 20:30 kick-off it seems.

Next upstairs Sex Dwarf from Stokholm, SE – they where dubbed as „Raw Noise“ and indeed their show was exactly that in fast forward and with a singer that yelled at the audience like no tomorrow. Raw, just raw!

Downstairs again the first „highlight“ (if i may), Tørsö from Oakland who put themselves as „D-Beat Punk“ which is just another label that would rather fend me off. But glancing over the stage i got rather exited: Great stage backdrop, smart looking members and half of them female. Now i got exited – they kicked off like this:

Yep, that is to my liking. And as a band they seemed to be very much tighter as their predecessors and mu-sick-ally more gifted indeed.

And as they did stick with me I went on to tape another smasher. By now the Hafenklang also was a wee bit more crowed (though still too empty compared to some other shows) and they got their fair share of applause.

Yep, that has set a good mark! Last year the „Exotic Band of the Day“ award went to Daily Ritual from SG, this year Scumraid from South Korea took that tag.

Boy, they looked different and indeed they sounded very different. A high pitched wall of noise with a tiny little girl behind the drums. Quite stunning and by all means not my thing. Nope. But that is the beauty of the setting, you do get exposed to stuff you would pass by and finally have to make up your mind.

Wandering downstairs the audience was … stunned. 3 Kids where on stage that somehow looked like having grabbed the instruments from a bands and jammed along. Strange. And boy those kids looked young, 18 and maybe just a little bit more (though for us over 50 oldpunks hard to make out).

Yes, they had another kid hopping on the stage and singing. And how did they sound like?

Ups, that is straight edge D/C hardcore indeed. Wow – these kids know their stuff and they serve it indeed in style. The only item that did not really work was the singer trying to look hard and angry as in angry young man: It just did not work. Never mind, they took the audience by storm and got the biggest cheers so far!

Rushing back upstairs for the next exiting band my fun was slowed down: Lecherous Gaze tried to take the stage but where slowed down by their main guitar hero – either by a not working amp or (my feeling) by him being unhappy with the guitar sound and requiring more (though already blocking half the stage with his sound effects). After much back and forth and an additional amp being pulled they kicked off:

Their singer styled himself as a hunchback (he was not) and that guitar hero styled himself as a young Greg Ginn. On top of that they had Gimli, son of Glóin, as drummer. They claim „…to bring dangerously heavy rock back to the masses“ and cite MC5 and Black Flag as their key influence. Nope guys, neither masses (plenty of people left the upstairs stage early) nor style (by all counts) – sorry for that!

With that disappointment i went downstairs only to have a déjà vu: Two of these Protester kids where back on stage, the singer on drums and the drumer on bass. Next to them a new kid on guitar. Strange …

OK, they had someone jumping on stage to sing (and grabbing the wrong mike) with them too!

Now we where in it for something serious: I would guess they blend trash and hardcore and thus can be dubbed trashcore but i am not in tune with the mu-sick-al styles handed down today so i can be utmost wrong.

By now it was quite late and some of the good folks had already left. They missed quite an energetic set that at least did not venture into metalcore (that would have pissed me off i guess).

And then, as late as 01:00 in the morning Red Death played just another encore and finished off the 3rd edition of the K-Town warm up at the Hafenklang for good.

We stayed for records and merch and more talking, so i was home late and quite tiered during work on Friday. But i work from home and can stretch the rules of working quite far so that was ok.

Eager to see more next year and sure ok if that includes bands i do not like – still i get to see a lot for next to nothing. Let’s hope that next year more people try that surprise pack – you won’t be disappointed.