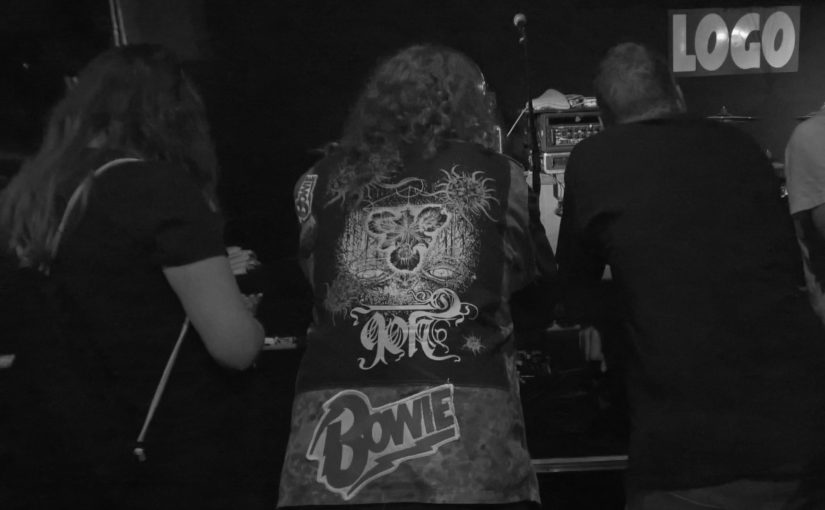 Quite often you go to shows mainly because of another friend is going, sometimes it needs this warm feeling to be convinced to go out. On Monday night i had all of this but non of me mates where there – that friend giving me the push to be at a show was someone who does not know me, but has been with me for quite some time.

Welcome Mr. Steven Shane McDonald of Redd Kross fame (and OFF! and most recent also Melvins fame). I’d go an extra mile to see Redd Kross (one of the most perfect Power Pop bands) and i am also willing to pay some extra bucks. That upfront payment was good, as the Logo was sold out and packed – most of the audience though waiting for the heavy duty from the Melvins.

So it was me, a lot of hairy guys, some young girls and i knew only one person in the audience (say hello to Olli). And i recognised about 3 faces. Wow – i sure was breaking out from normal custom, that would be a bonus!

First on Redd Kross, this time the McDonalds brothers plus the Melvins drummer plus another friend of them helping out on guitar. Initially they sounded way of, specifically the drumming did not fit well. But the more they played the better they became – by the end of this tour they will be there.

Unfortunately they only had a small rooster rehearsed and were confiened to the support slot – so some of the hits i had in my inner ear never made it to the stage and thus back. But one thing for sure: Melodies, harmonies, fuzz and loads of chorus signing. Just perfect!

A band that can create and re-create this beauty can’t be that bad:

And to make it easier … sing-a-long to this:

Did i like it? Yes i did! Would i prefer more? Yes i would, best with a well rehearsed group and as a headliner. And one item got stuck in me head whilst watching Jeff MacDonald singing: Should Leonard Graves Phillips ever die it would be Jeff who would be a perfect fit for The Dickies!

I have never been a real fan of the Melvins, too many friends who liked them took too many drugs and their sound was way often much too strange to my ears. But they have their moments, specifically when they take apart other songs and reassemble them in a Melvins way. A unique way. And where Redd Cross had a 45 minute limit Melvins played for slightly above an hour and ended the set with a long lasting and slow but heavy exit. Stunning but just no my favourite thing.

And the audience? Hairy and thirsty. There are two more Steve McDonald groupie items worth to mention here:

And his daughter has a neat small LA Punk H/C band that is worth to be checked out:

Did i mention i am sold on Steve McDonald?

And just in case you are not sold on Redd Kross, people claim it is the most important band in America (or, better, have claimed). Nevermind, a neat write-up of their history and them scamming money from the big lables (in times where there was still money) you can find over here.