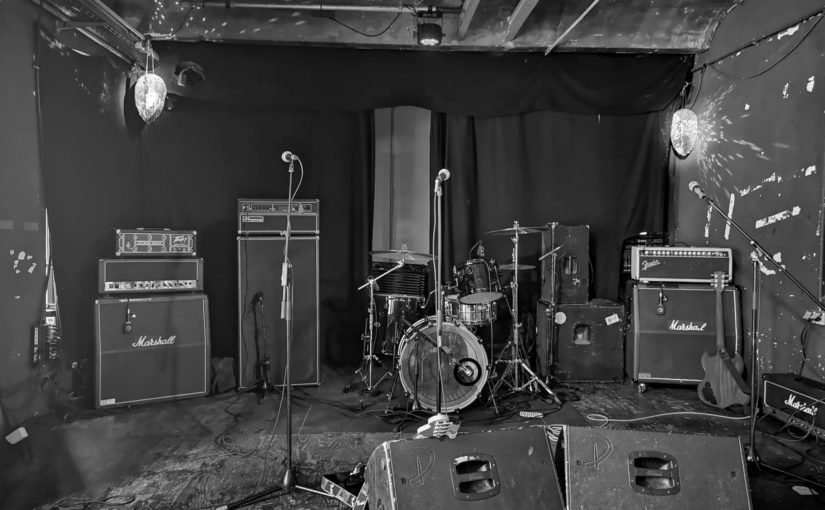 I think it is the 4th time that No Problem graced Hamburg and boy was i eager to see this powerhouse yet again. Be it on record (with that heavy scent of dark wave or whatever you call that) or be it live (aka atomic explosion) they are just a force. And friendly folks on top.

So not only my humble self made it to the matinee show on typical April Sunday but also 5 of me elderly mates (and plenty of younger folks).

Support was from Bad Affair, who played their 2nd show ever and their first in their home town. A chord-strumming wild bass, a guitar that could also play in something more metal and a sturdy drummer paired with a female singer.

It wasn’t particular my thingy, at times the rather brave vocals annoyed me, sometimes the guitar was just too … hairy. But at other moments their whole thing glued together well, specifically when the high vocals paired with a high and flirty guitar against the wild back line.

They only had a couple of songs but still played an encore: Whilst i do appreciate when a band does a hats-off to a legend it was very very cumbersome to list to Bad Affair slaughtering Civilisation’s Dying from the mighty Zero Boys.  Not a good job, sorry. Paul Mahern will not be happy!

But by all means check them out for yerself:

And with little changeover it was No Problem who took the stage. Their bass player could not make this time, so they had a girl filling in. And with quite some great soundscapes they kicked off:

Wham! They hit the audience indeed like an explosion and they take no prisoners. Against their marketing spiel they matched everything:

There ain’t no rest, there ain’t no holding back and still it is just not trashed out in speed but beautiful gems of songs and brilliant guitar work. Twin guitar work that is, some of the songs with the single guitar tended to sound imperfect (to my silly untrained ears).

It was upstairs at the Hafenklang and about half full but No Problem had the crowd right at the stage and got loads of people moving. It took though one of the elderly to start a circle dance and get additional (and asynchronous) movements in.

I am sold on them. They have killer records out that stand the test of time and they are live just so full of relentless energy that i wonder what fuels them. It may be because they are from Edmonton (home of the mighty Oilers) out there in nowhere Alberta, Canada (and by my guess deep in Canadian redneck territory). They may not get a lot bands traveling through and they most likely get hassled big time day in day out.

But here, over in Europe, they treated much better and so good that their short and relentless (can’t use the word on them often enough) set ended with a Viltones cover if it did make it out correctly:

Perfect! And though they only had little merch most of us got something: A missing record, a badge or myself a shirt. They deserved it. And some chatting, starting with my American Nightmare shirt being adored to discussing the great performance this season by Leon Draisaitl for the Oilers (105 Points make him the highest scoring German ever in the NHL). Did i ever note that i love Hockey and love playing Hockey?

Fun was also that me mate Riebe got carried away so much by No Problem that he dodged our „4“ taunting (footie inside joke) and exclaimed that „ … us 5 are the last survivors„. This was hinting at the fact that all of us where attending shows together since like 1980 and at this occasion nobody else from those days was around.

That fun moment got some icing on the cake when we realized that one of us sported the original shirt whilst a younger comrade in front of the stage could only sport the copycat version (though the Night Birds have all rights to do so).

Great show, good entertainment and an early end – some used that early ending to hop over to the Monkeys to see NYC H/C by Bold, i resorted back home for an early night. Age, you know? 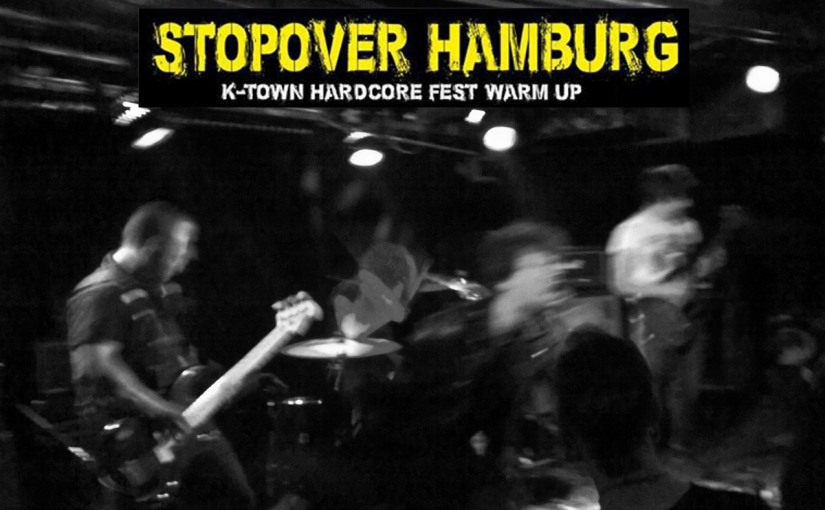 A bargain. Nothing more and nothing less. And an early, daylight plagued start. But where else would you get 6 bands for only 10€? Hamburg nicely lay en route to København aka K-Town and the massive K-Town Hardcore Fest at the famous Ungdomshuset. The Hafenklang made a nice effort to persuade some bands to do a stop-over, much appreciated indeed.

Arriving on time just ahead of the start the outlook was grim, more band members than paying audience. In the end some 100 odd folks where around, definitely a too low turn out for some great bands.

First on Maailmanloppu (that is Apocalypse for all you being ignorant of the mighty finnish language) and they took the stage with energetic and fast paced hardcore and the angry vocals it deserves. In finnish though, so no clue what they where complaining about.

Bam. Bam. Bam. Done. Me mate directly marched to the merchandising and got all the 7″ and LP’s they had. They where a big surprise to me too i have to admit – setting aside the language they where classy US Hardcore material by all accounts.

It kept my finnish language capabilities busy with the next band (Lapinpolthajat, something with Lapland and Politics is my wild guess), as much as the sound engineer tried to communicate with them in non-finnish (that steered some blank faces on the stage). And it got more melodic but kept the pace and the harshness. Just great stuff, delivered by an outfit that could not be stranger (in terms of the different personas and styles).

By now there where a couple of more people, in front of the stage and also now on the stage. All the way from Singarpore (or சிங்கப்பூர் குடியரசு) came Daily Ritual and they crowed the stage with 3 guitar players and a massive wall of sound as a result.

They sure looked different and they sure got a different sound. And pleasant that sound was, great guitar play and rather soft dual singing. They have their niche and they create something unique in that – a worthy setup for K-Town Hardcore Fest!

And they where the first band that actually did make an effort to connect to the audience with more than a single word. Again, they where a surprise and the next mate went to the merch to get the LP. Deal! Half time that was and it already felt like something special, like a small youth center show in the early 80s (though today’s bands generally have better abilities i need to confess).

Ups, next on some Italians that clearly rather had my age (50+) then the other bands. They formed in 1981 and they did play the mid-80s metalcore that Italy got famous for back then. I did not like it back then and i do not like it now, so did spend time outside chatting – actually like many others.

Back inside it was time for Orden Mundial (or World Order, for those who did let go the spanish class) and boy where they different. If there was a price to be won for unique sound (the guitar player played through two amps left and right on the stage) and unique singing (the tall singer yelled at the audience with a very angry stare) they where by far the winner. I was not really thrilled by their sound but it definitely had the aura of something unique. Muchachos bien hecho!

No Problem. To be honest they where the reason for being down at the Hafenklang. I missed their raunchy show on the MS-Hedi (a small tourist boat in the harbor that is being used for live shows whilst cruising the river Elbe) last year and people assured me that i missed something big time – they take no prisoners (to the extend that the captain had to stop the cruise to order order ….).

And where Maailmanloppu started No Problem took off and the ‚bam-bam-bam‘ was multiplied by 10. Wow. Stunning. Fast. Precise. Energetic. And the singer the loose cannon that makes a difference. When he was not playing guitar next to singing he did throw himself into the audience, no matter what.

Gosh. Punk-fucking-rock served at breakneck speed and with true style, from Canada. The only disappointment was that they did not play that one song that i do love so much (but the internet allows me to insert it anyway, turn it up fucking loud).

And there was no slowdown and there where indeed no prisoners. And there was also the sure thing that they deserve a larger space, a bigger audience and even more success. They simply got it all right. Word.

6 Bands. 10€. Loads of Merch. And you where not there. Why? The next time such a great package get’s served please get you ass up and show up. Thank you. And thanks to all 6 bands for giving Hamburg the opportunity and og nu nyde Kopenhagen og killt det på Ungdomshouset!