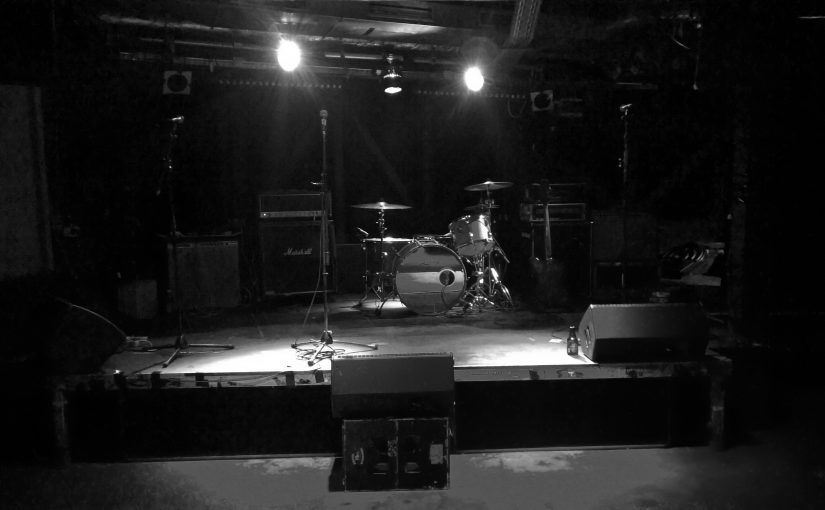 The mighty Night Birds where back in town, one of the most underrated bands when it come to me: They are the perfect blend of H/C and Surf and they most likely have the most versatile guitar player around with PL Russo.

Kick-off was quite early and with 4 unpretentious lads from Bremen (of all places). Within the first song it was quite clear that they where tight, together and they actually had found a very unique sound – both the musical backdrop but first and foremost they way the singer delivers the vocals.

Wow – another one of these surprises you only get when you go out and see shows (i guess i would have never encountered them else). Great stuff and – besides some guitar wanking and the beard of the bass player – delivered with style. They should have deserved a wee bit more people in front of the stage but you could sense that people did dig them. Well done!

Next and without a lot of changes the Night Birds. Last time round they played upstairs, this time round the bigger stage downstairs. It was not really packed but a good turnout for a rather odd Thursday evening in April.

Yep, that’s the Night Birds. Hard hitting and taking no prisoners from the first chord. Also the different stage persons and movements on stage fit perfectly and bring across in an excellent fashion juvenile angst grounded in classic H/C and a heavy heavy scent of surf.

I don’t know if Brian was doing a Spinal Tap thingy when praising the Hafenklang (and that is something that can’t be done enough) and re-thinking where it was (in Hamburg mate, in Hamburg) and suggesting to people to better move here. But damn, he was right anyway!

And they did not waste too much time and continued to blast the audience away with no stop-over.

Yep, that fuels all my needs. Without the slightest doubt. Hang on, all my needs? Nope, actually not all my needs – my Surf requirements have not yet been met (and “Having an average weekend” also was not delivered). Damn, would i end up an unhappy bunny?

No, i would not. And in preparation for their final song they delivered another classic surf theme…

Now i was a happy bunny and risk of mutiny down at the harbor front was done away with. The only shortcoming was that the set was rather short and very early the show was done and me and me mates where about to leave.

That said, i did not leave on a bad feeling as me mate Thomas had a neat gift for me: The Freeze – Someone’s bleeding EP limited edition in yellow vinyl (from that dutch guy who runs Gummopunx – dank je wel!). Perfect night out with surprise on support, class on main and free vinyl. Happy Bunny all over indeed!

Puh, it is summer in the city and the city was full of people that wanted to see the Hamburg Cruise Days and the cool blue light installations at the Hamburg Harbor. And the Hafenklang being on the harbor front gave yet again a nice mix of punks hanging out outside the Hafenklang and tourists trying to avoid them. Fun. As ever. Upstairs at Goldener Salon it started with Irish Handcufs from Regensburg and it took me only one song to dislike them as lutscher-core (and indeed i am not nice here but i was up for something different tonight!).

I rather enjoyed lengthy talks about music and life as such outside. Next on No Weather Talks from Hamburg and i disliked their pop even more then the lutscher-core (though they had a female singer, something i normaly dig).

Now for sure only the Night Birds could rescue this hot evening and boy they did! From start to finish they rocked the approx 120 people upstairs at the Goldener Salon and did not leave any questions.

This is how i – in all  selflessness  – want it to happen: A cool drummer with a Slade T-Shirt. A Bass player that rocked his Bass. A guitar player that knows his surf. And an enigmatic singer with all signs of crazyness. Cool shit, played hot as hell. See yourself and listen up how they started the show:

And the best was yet to come: Mid set the bass broke down and whilst the technical error was researched the drums and the guitar went into a familiar tune … “Shadowy Men from A Shadowy Planet“, the signature song from the CAN comedy series “Kids in the hall” (dating back to 1988). Now that was fucking super cool. I talked to the guitar player after the show and he was very surprised that someone not only did recognise the song but also knew the TV Show. I guess that comes with age and being over 50 plays into it. I told him to put more of that into their set, let’s see what they do!

But hey, really, if the Night Birds continue down that path of mixing California Hardcore with Surf, throw a blend of DI and JFA in, then i will buy all of their records. They are a real force and a true gem. Thanks for a great show guys!