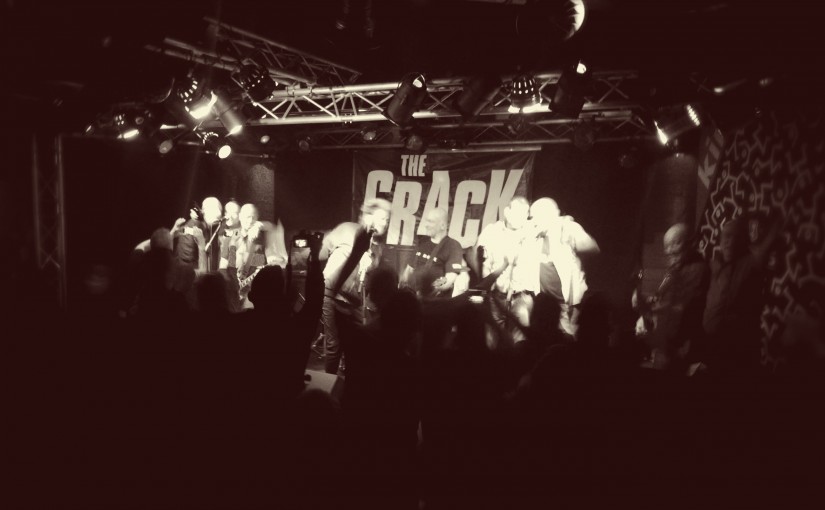 It’s been a while since a new club has opened it’s doors in Hamburg – Monkeys (residing where the 3rd incarnation of the kir once graced Hamburg Altona) provides high hopes for the future and already has quite some good shows announced. Official opening will be later in February (28th actually) but construction almost finished and The Crack and Last Rough Cause where on their way to Oberhausen, so a pit stop in Hamburg made utmost sense.

First on Last Rough Cause and they had to play a rather empty space in front of the stage. I like some of their songs and they have some good tunes but somehow on stage that night they never „energized“ themselves or the audience – at least my feeling. Also too slow for my liking and too shy as stage personas. They do work on record – on stage they did not work for me that night. But hey, at least the first band ever on that stage!

Next on The Crack and by now approximately 100 gurls and lads, mostly of age, graced the place that i guess will be able to hold 300 people (though maybe only 200 will be able to be in front of the stage).

And they kicked off with „Nag Nag Nag“ and from the stage personas where quite the opposite of Last Rough Cause: Fun, action and „tongue in check“. Sure thing they had the audience going from 0 to 100 within minutes.

Early on in the 80s they has some softer edges but all of that has now been superseded with a wee bit of Sladeness and some more speed (as it serves most bands today). But they had fun, interacted with the audience and some oldpunks really get going. Great to see! And sure thing they ended the setlist with their number one hit, a song that both serves and haunts them i guess:

No doubt, that is what people wanted to hear. And sing-a-long to. And putting their hands up in the air. And time warp themselves back into youth and into the 80s. And do not care wether the all chords where right. But hey, who gives a fuck!

With that The Crack decided to play on and re-do „My World“ but have the audience sing.

And so a fun evening in a new place ended. Looking forward for a full club and other great bands in future…