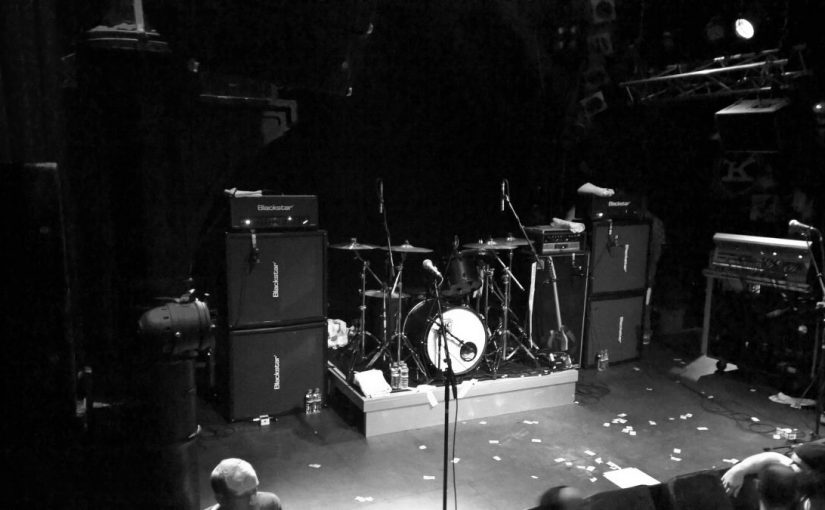 The tale of the two Black Flag incarnations has been an ugly one, with law suits and what have you but in the end of the day it boils down to mu-sick for me. And there it is a rather clear cut:

Greg Ginn’s outfit called Black Flag continued down the path of the late Black Flag and their – at least to my ears – slow and complicated metal style  and seems to be on hiatus since their ill fated “What The …” 2013 LP (with a non-Pettibon cover that just illustrates how off Ginn seems to be).

On the other side founding members Keith Morris (vocals) and Chuck Dukowski (bass) play with former members Dez Cadena (rhythm and vocals) and Bill Stevenson (drums) plus the addition of Stephen Egerton (Descendents/ALL guitar hero) and keep their stuff clearly on the early Black Flag output (with some small excursions into heavier stuff, then sung by Dez).

And they name themselves Flag IIII and they are the clear winner on all counts. If you ask me. Curiosity test: For those who dare mix old Black Flag stuff with Keith singing with the first Off! EPs – and then guess what is Black Flag and what is Off!

Proceedings where kicked off with Teenage Hate from Hamburg and it was their last stand.

They were hampered with line up issues but provided a hard and to-the-point set nevertheless. Unfortunately, as ever, to a rather empty space in front of the stage and many folks rather having a chat and a beer at the bar. The missed songs like this one though:

Next on Krank from Hamburg (not the band with the same name and the allmost same genre from Zürich) and their “krankpunk“. They are in mind much more gifted than Teenage Hate but they did not get their recorded sound onto the stage  that night if you ask me.

Strange one, normally it works out the other way round for – Bands prove on stage their worthiness. It might have been me that evening, it might have been the band or the soundman (though those working the Knust are trusted members of the circut) … never mind, make it up for yerself:

And that paved way for Flag IIII, who where quick and professional to set up their stage and then taking the same (and the audience in one go) with some simple tunes and yelling for “Revenge“.

Yep, that’s it. That is the sound of Black Flag. Delivered today. You can moan and bitch that Stephen Egerton “stole” Greg Ginn’s guitar sound – i’d rather say he adapted to it. And without a stop they kicked into “Fix Me“.

No doubt, that is how i expect that part of the Black Flag history (or legacy?) to be delivered. To the point, perfect sound, stage presence and also visual (Chuck and Stephen storming forward).

And it also had wit and humour as you can see from the intro to “No More“.

That Chuck is bad-ass sure thing but that Bill now sports a massive chest and likes his nipples? Ok, that was too much! And as it was too much they changed over and Dez took the mike.

“American Waste“, an often overlooked B-Side of the Six Pack EP. Me mate Frosch actually made a nice tip-off to said EP by greeting my prior to the show with a six pack (of warm beer to much disappointment).  “Spray Paint” from Damaged was next and Dez slightly rusty voice fitted the bill to the max.

By now the audience was more than thrilled and singing, dancing and enjoying it like hell.

The only shortcoming for me was the massive amount of Turbojugend geezers that went to the Knust as all other Turbojugend-Days shows that night where sold out. In fact they got the real thing, for once.

If only some of the other lackluster re-unions had that power, energy and street credibility – the mu-sickal world would be so much better! But these two subsets did draw on the old folks so they needed a break.

Coming back for the encore Bill, in all his simple truth and with all his honesty, gave a short, simple and oh so true statement.

Indeed we have all been eager to get our hands onto that new Descendents album. Some in the US where lucky where it was shipped a week early, some in Hamburg where lucky as the postman delivered it at 10:00 in the morning and me pitiful me waited all day long for the postman … he never came (but dropped it on Saturday instead): I literally had a “Nervous Breakdown“!

That and a couple of more encores left a sweaty and soaked audience in the not fully packed Knust (and real disappointment if you ask me) and no way that this was not a killer show. It’ll be in my Top 10 for 2016 and it is a clear contestant for the crown so far.

Was that all that was delivered? No, they almost branched into spoken words, not sure if all got the jokes within it…

Yep, like all old fellas they talk about health and compare medical resumes. Just like me and me over 50 mates start to do. But where else do you get the old to chat about their medical up’s and down’s and praising the young for their recordings? Never ever out in your home town, i bet ya!

And that’s all? Nope, there is one more down in hi-story:

Next to the Dead Kennedys 1980 and 1982 Black Flag where one of the first CA H/C Bands to play Hamburg. Henry Rollins remembers this in his Black Flag Tour Memories (“Get in the van”) as follows:

And we old folks remember it because Stickel (of Channel Rats fame) untied the show laces of the singer of the support band (Nig Heist if i recall correct) whilst standing directly in front of the stage. To much embarrassment for him and laughter for us he was ordered to re-tie them and did so.

I do not recall it to be that nasty with Skinhead violence but maybe as a local i was too much accustomed to it. I do recall though that me and me mates stood right there in front of the stage and loved it to the max – as much as me and me mates (and a couple of more in the audience) loved Flag IIII.

We love you – so thank you Flag IIII!