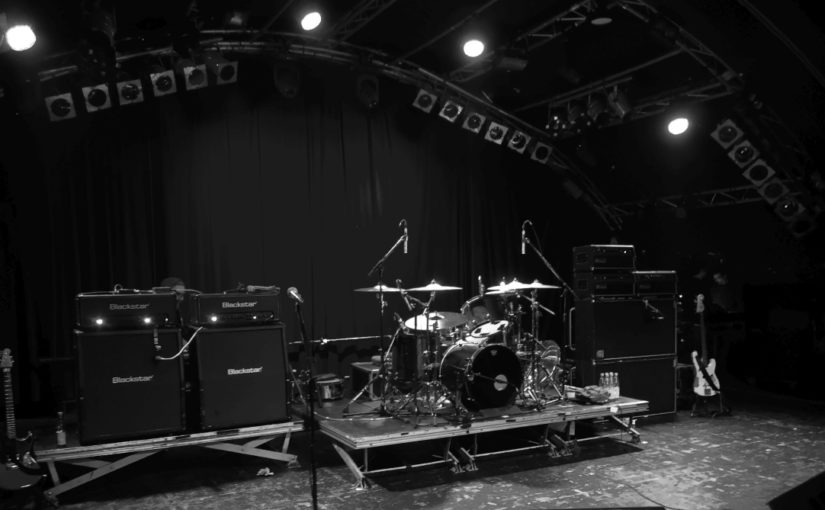 It has been 21 years. Twentyone fucking years. A painful long period without my loveliest band gracing home shores. Damn. Others where lucky and caught them abroad but i am a homie and specifically i’d love to see them at a place like the Markthalle.

It was a great show back then and all of Hamburg seemed to be eager to make it a great show again. And thus it was sold out in record time. When FLAG played the Knust two years ago we chatted with Mr. Egerton and he confirmed they were keen to get back to the Markthalle and sell it out – which indeed they did. He noted that for them it is a cozy club show they love compared to the bigger places they play in the US.

With two support bands it was an early start and Spider from Long Beach had the unfortunate task to play the rather empty hall.

They did not play long and they did not get a lot of applause. For me they were just not to the point – they had elements old LA punk, elements of H/C and then some more. But all crushed into a rather long song. I guess i would need to see them in a smaller setting to make an accurate judgement. I gave them some of my time but then resorted back out for more chats with the endless number of mates around. Check them out for yerself over here.

Next on and competing with France vs. Belgium where A Wilhelm Scream and neither myself nor most of my friends where anywhere near being fond of them.

They had the space in front of the stage pretty full and they had a number of fans apparently. And they had a mu-sick-al style that i just do not like. Period. Form your own view but i will forever avoid these soundscapes.

Frank, if i’d have a say (and the money) i would have paired the Descendents with Daikaiju as the sole support band. They would have blasted the room to the max (and their speedy and heavy surf would have been a perfect match).

And once the support was done all of the 1000+ folks attending moved into the main hall, filling it up like it was filled up in the hey-days of Punk (79-83) in good old Hamburg. But before they took the stage they did have a date with my football team in the afternoon and joined the cast of US bands that do cross promotion with the FCSP. I am not necessarily a fan of it but hey – if the band wants it, why not.

The one thing though that i do accept is that is carries a cause and the cause is a shared good one. And the Descendents went quite some length with Who we are (and got some flak in the US of A for it) and they got a message across that also the FCSP and the majority of it’s fans dare to carry – loud and proud. The only item of concern is actually the lackluster artwork on the front, sorry that can’t be the work of Chris Shary (else i need to divorce with him!).

And then they took the stage and they took it with grace, a broad smile and pretty relaxed. And off then went into „Suburban Home“ and the Markthalle went apeshit. Lots of dancing, lots of fists and some singing. Yep, the Descendents. Yippie!

And what did they do? By and large they played songs from all periods and records. They also played one song that i still believe is a hidden gem (and for me has an annotation to a long lost girl that did not turn out to be me love) – here is Clean Sheets (and listen up youth, keep yer sheets clean!):

What did strike me yet again was the broad smiles all four carried on stage with Bill up there behind his drums sporting the biggest one. They are up there, very self aware and self confident and they do know what it take to deliver some of that joy, love and energy back to an eager audience.

Another example is Good Good Things, a song that many passed by on „I don’t want to grow up“ and that i believe ranks in the top 10 of the perfect pop songs (next to stuff like Sunstroke from Guns’n’Wankers). And yet again it carries a message for the youth:

I taped this song for me love ages ago with a singular intent (and me love later said YES, lucky me). Here it is youth:

Fun fact: At 00:55 on the lower right corner you can see a very famous person entering the picture and singing along. Little did i know that i was actually standing next to a Punk Rock legend from sunny Brasil. As i was tipped of the day after by Paulihno (from Flanders 72) it was their executive producer Davi, who is the capable guy behind recording, mixing and producing every single Flanders 72 record. It is a small town world on the punk rock circuit!

I think the Descendents gave the lot something like 90 minutes, they took on a couple of encores before hitting home with an on stage improvisation that had elements of Catalina and other songs. A really cool jam but most likely way too heavy food for most of the audience.

Just a perfect set in most likely a perfect setting (venue, date etc) for Hamburg. But this time round that ain’t the limit for me. With a gentle push by some of the Punk Rock Hamburg Descendents connoisseurs i took on to see them again, together with SOIA and some others, in sunny Barcelona.

In hindsight i should have just taken the week off, travel to Berlin and Munich and then Barcelona. Or i should have just abandoned all of these plans and travel south for some Ramonescore and Surf at the Punk Rock Raduno in Bergamo (something that some others of the Hamburg lot will do).

But hindsight is a silly thing (not a silly girl) and thus i just stick to what makes my heart warm and me feel good: The Descendents and their œuvre!

And for those who ignored it so far: It is you sole duty to get this movie into your household – you will be proud of the tears you will shed.