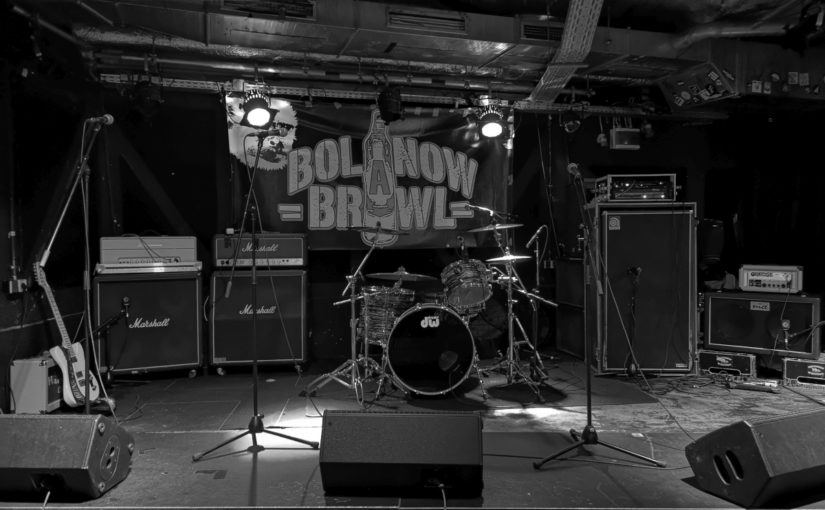 It has been a while that the Hard-Ons graced these shores, i can’t even recall when and where i did see them in the 90s the last time. But they stayed forever in my books as one of the bands that had an almost endless stream of great singles with excellent covers. Still, sometime after Yummy (their 1990 effort) they somehow lost me from a record perspective (i still got more than 10 records by them though) and some time later also from a live perspective.

Nevertheless it was worth it to give them yet another chance, specifically as they now are a 4 piece and they have Keish solely on vocal duties whilst new recruit Murray on drums.

The support slot on this warm and sunny Wednesday (that had Germany exiting the pretty useless 2018 FIFA WC vs. South-Korea) was for locals Bolanow Brawl and they took it with pride.

I do not necessarily dig them but they have grown  quite a bit: They have a very tight sound and absolute excellent dual guitar play (and on top great whoooa-background vocals). But the thing that keeps me off is something like an undercurrent and that keeps being both that they sound like something i heard before and that their songs tend to be too complex and too long.

That second thing was actually a shared observation with a fellow friend in the audience who has a sufficiently successful career in a band so seems to be in the know much more than me when it comes to debunking mu-sick. But what they do they do very well, so i stayed on through the set (whilst many others enjoyed beer and sun outside).

Next on the Hard-Ons, now fronting about 75 people in a rather empty Hafenklang. I observed some initial surprised faces and heard some comments about the 4-piece thing, by the looks many people did not keep up to date with the ins- and outs of the Hard-Ons (breakup 1994, return 1998 without Keish and then 2016 the final return of Keish to from the 4-piece). But down-under is far away so that somehow comes natural.

And the Hard-Ons gave all that you would expect: Loads of power, loads of metal infused whatever (someone on the internet (damn internet, never forgets) called it once „… a mix of punk, pop, and metal with dashes of power pop, psychedelic rock, thrashy metal, and a healthy dose of humor„). In the initial part of the set it was a wee bit too much of that long haired guitar work (though Peter Black is a terrible great guitar player and Murray/Ray are a terrible great driving backline).

There where also some fun moments, specifically as the well intended bad joke about Germany going out was met with sheer ignorance by the audience. On top i also liked that after 3 songs everyone but Keish uniformly took their shirt off to sweat it really out. And sweating they did.

And then came overtime and they gave the audience the choice. Some requests where denied („Sorry Mate, we did not practice that one…„) others where met with a smile (and a quick on-stage rehearsal of the chords). And within that, they also played one of my loveliest songs:

And yes, for me they still have it and as a 4 piece they actually have it even more. The only item to complain about was that guitar, bass and drum where quite loud and Keish was quite not loud enough. But i guess that comes natural when the dominant force is the strings.

And how did that one sound in the 90s – here is some MTV history for ya:

In the end they played like 90 minutes i guess and they put in all i want from a touring band: Energy, humor, humbleness and both listening to the audience and playing for themselves. No complaint here. I think i will now check out they more recent records too.

Perfect Wednesday out at my local club down the road and more to come in July (let’s see what happens to the Adolescents show given the sad news of Steve Soto having passed away).