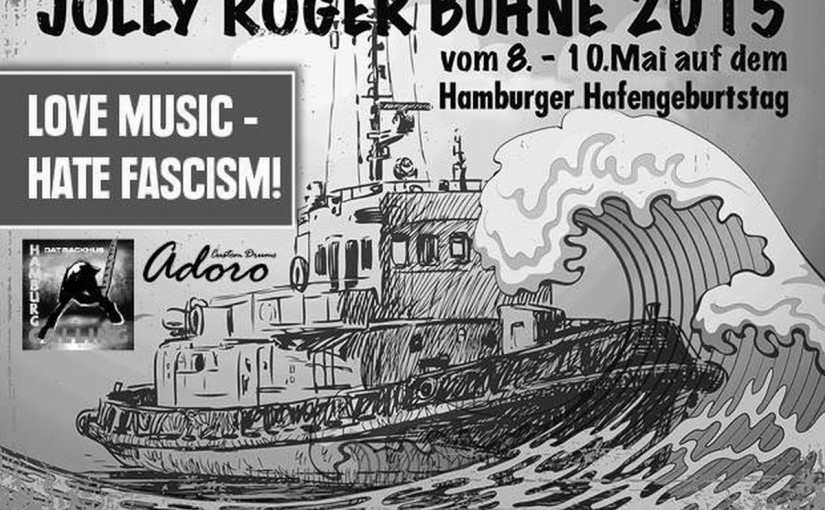 I do have a dislike towards Open Air shows, be it large festivals or just the fact that a band plays outside a building. And when then setting is paired with one of the main tourist events of Hamburg – the annual Harbor Birthday Celebration – then this dislike of thousands of tourist, zillions of drunks and endless food and drink stalls fends me off big time.

But this year Platzangst had a slot on the Jolly Roger stage and where opening for The Talks – so i did push my luck and did the trip down to the harbor .

Oh fuck – it was plain sunlight, around the stage was all sorts of disturbing sounds from booze or food stalls and in front of the stage way too few people.

Don’t know if they tailored their set to the rather unusual audience and stage but for my liking the set had too many „slower “ songs. But what did work was their stage appearance (though Boffer would have looked so much better if he too would have worn plain black or a full white contrast) and movements on the rather large stage. And the sound was perfect too, thanks to a very professional PA.

Next on The Talks, who played Hamburg in October last year when they graced the Hafenklang further down the road (and, in a better setting, sure indoor). They attracted more people (but that was down to sunset coming up) but they also attracted more who just strolled along the party as their sound is lighter, more „into the feet“ and that ska appeal that makes people naturally move.

I think they have a career ahead if they play their cards right, just on that edge of lighter indie/pop/ska play that in the UK attracts people. But also in Hamburg they where able to grab people just by the sound. So all-in-all not bad at all.

Once The Talks where done i could have stayed on to see C³I on the Störtbecker Stage up on Hafenstraße but my dislike of the surrounding (and the rather stiff cold blow from the riverside) did fend me off and i took the train home.