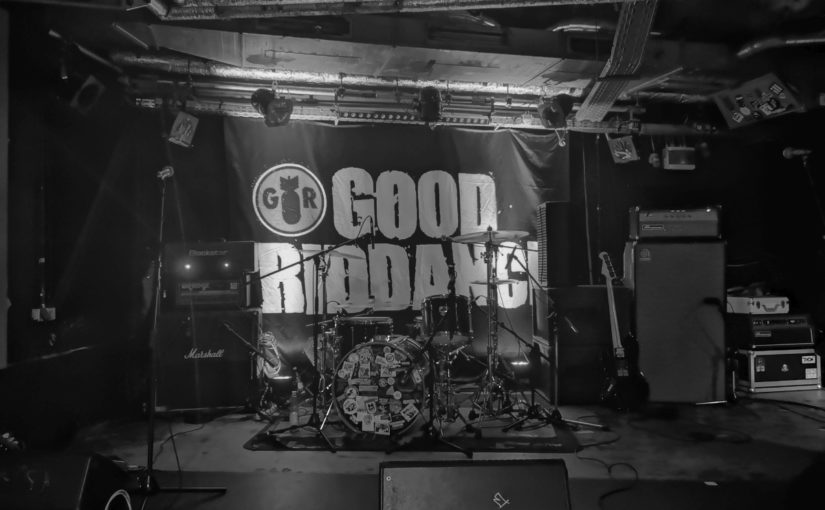 Now that was a tough choice: The Monkeys had the Rejects for a 40 year anniversary show that would be a killer and the Hafenklang had Good Riddance, which i believe  have not graced Hamburg for … say 15 years? So what to do? Both went on Ticket sale early and both reported good traction on sales.

Whilst a large part of me mates jumped to the obvious choice of the Monkeys (and reported a killer show afterwards) me and a small part of friends decided for Good Riddance, as this would mark their comeback: Both in Hamburg but also after their 2007 breakup.

And also the Hafenklang very early reported „sold out“: Two support slots went to local bands, kick off would be with Hamburgs finest ramonescore outfit The Haermorrhoids, who are busy touring and playing support slots whilst preparing for their next release.

And this is what awaited the die-hard fans in the front row:

15 songs, 30 Minutes. Perfect „less than 2 minutes“ scenario of pure energy. They kicked off slow and then blasted away. As the have now played a lot they are very tight and have perfected their set, which on this evening also included some new songs.

The sound though was just not perfect, somehow it did not have the right balance to me: some of the vocals too low volume, some of the drumming not coming across right and it had a bit of an overcast of low frequency noise.

That was „1984“ and one of my favorite songs, specifically for the lyrics, an ode to mom:

As they only had a 30 minutes slot there was no fuzzing around, even technical issues with the hi-hat did not stop them of pushing forward and getting the front row dancing. Whilst the Hafenklang was sold out unfortunately some people did let them go and definitely missed something.

I would be more than happy if they just get into the speed and rhythm of them brothers Ramone and put a long player our every year. As such the news of them doing new songs and having another record on the horizon makes me fly high like a junkie – hopefully i don’t overdose:

As always „Overdose“ finished off their set and for me that was – despite the sound issue – a more than enjoyable set. With perfect sound and light it would have been killer actually.

Where The Haermorrhoids nailed it the next band would not. At least for me. And also for a few more who wandered outside rather for some beer and chats.

It is not very often but sometimes a band either through look or sound, through vocals or something else fends me off, here it was the mu-sick – it just did not make klick for me. Check Kapot out for yourself and if you like them go out and see them!

After some changeover and some waiting the by now definitely packed Hafenklang got what they waited for – here is how GR kicked off:

Bang – that’s a perfect return onto a Hamburg stage. I have no clue into what cupboard people put them, i guess it the melodic element on top of that hardcore sound that makes them outstanding, almost never at the risk of being too slow, too poppy or just too much of a waste.

With GR you have all elements that a band should bring onto stage: A near perfect drummer that hits hard and smiles away. A joyful bass that not only plays hard’n’fast but also has an eye for fun with the audience (and accepts the risk of being hit in the balls). A fast shredding and taken away guitar that drives the sound. And a singer that does not perform too many fancy items, schemes and maneuvers and just creates a center of attention through himself.

I knew immediately that for me it was the right decision to run AWOL from Cockney and with me many many folks smiled away or where throwing themselves into the pit, through the pit and onto the floor.

The only bad item was that it was a very male pit with sometimes little attention to smaller and sometimes female members of the audience that also would love to be near the stage. I guess that is the price to pay for having GR at an unusual small location against what they used to draw (also in Hamburg).

There was another bad item and that turned out to be a technical one that i understand was on purpose: Russ voice sounded very odd and after the show i checked with the Hafenklang and they confirmed it was due to him using his own mike, which somehow gave that sound. If he likes it that way, than that is ok but it gives a distinct different vocal sound compared to the records. And not a better one if you ask me!

Speaking of records i was hoping to be able to score the new record in colored vinyl but they had none of that record at all with them. Damn, now i guess i need to team up with others and order from the US, greedy record collecting scum that i am. And me mates are. And we all are!

GR ruled the Hafenklang definitely and the did wear out some of the audience, who sang most of the songs louder than Russ and who danced away relentlessly. They turned out to still be absolute perfect musicians, with a great sound and with some great songs. I would love to see them back in a slightly bigger environment and still sold out.

Thanks GR, on all fronts, for coming back!

At the end of a long evening i was like the 3rd but last person outside the Hafenklang after long rounds of chatting away. That normally tells me that i did like the proceedings. Back home and sneaking into bed i was wondering if it would have been the same at the Monkeys – i fear it would have been too!

Damn choices! But great to see that both clubs sold out and scoreing their share on drinks – we need them Clubs! So please all help to repeat this more often: Sold Out instead of Selling Out!