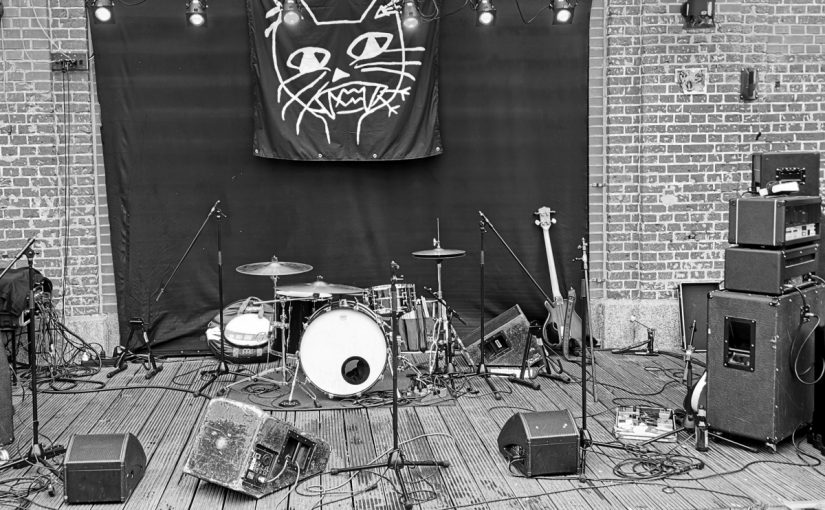 It is indeed a pity: Covid-19 and the rules that need to go with it have blown a big hole into me loveliest clubs intention to throw a summer of love. A summer of events across all the facets of the Hafenklang. So they have taken shelter elsewhere, where due to location (outdoor, namely) a higher amount of people can attend. Great solidarity between the clubs in demanding times.

Less solidarity came from the weather that Friday (pissing galore) and from concert goers: I guess not more than say 75 folks attended and a too large contingent (to my liking) decided to watch from the outside, by the looks largely people who supported the support from Berlin.

That support was named Trainingseineit Katzenkotze (Training Unit Cat Vomit if that works) claim the following:

They looked like fallen out of time (or a different space/time continuum) and they sounded even more so: Humpta-Punk that last time plagued my mu-sick-al liking back in the 80s paired with bad cover jobs. I did not take a liking, many around me did not take a liking but some fans from Berlin in the audience did, also the younger ones outside the fence of the Lattenplatz.

Not my thingy at all. If it is yours, enjoy it!

Next on Es War Mord and the sound turned around that harsh that i was looking for Doctor Emmett Brown, as he must have turned the dial on the trusted DeLorrean. California, anytime post 1981 it must have been. Some people claim they take a deep dive into Depro-Punk (a mu-sick-al cupboard i do not understand) i feel completely on the contrary: What they gave was a perfect set of almost sunny California Hardcore with a small scent of flirting guitar on top, just very very short of fully embracing a surf overcast.

And frank, i would love they attempt that stunt, i think their guitar on the left will master that one easily.

Boy do they sound good now! To my ears an absolute perfect set in a non-perfect setting. I think i pestered Fab from the Hafenklang twice to pair them with the Adolescents next year. It would be a match from heaven!

Also i would love to see Gregor from Sounds of Subterrania putting out that sound as a next vinyl in the same near perfect packaging as the other records. In short: Currently i am sold on them. Why? Listen for yerself:

Great stuff, though the enjoyment was short (show was supposed to end at 20:00) and was impacted by the piss-poor weather. What also was apparent was that their music would work so much better in a packed Hafenklang, but that’s the one item we won’t get soon – at least nor before we have assurance how that ugly 4th wave now unfolds.

The Hafenklang also took the 25th anniversary opportunity to issue a small Fanzine, looking at both history (below) and some fun facts around what they do, how they are integrated into the community and what you can expect of them (a lot, actually).

I am ready to get my 2022 season ticket, unconstrained.

Just bring it on! 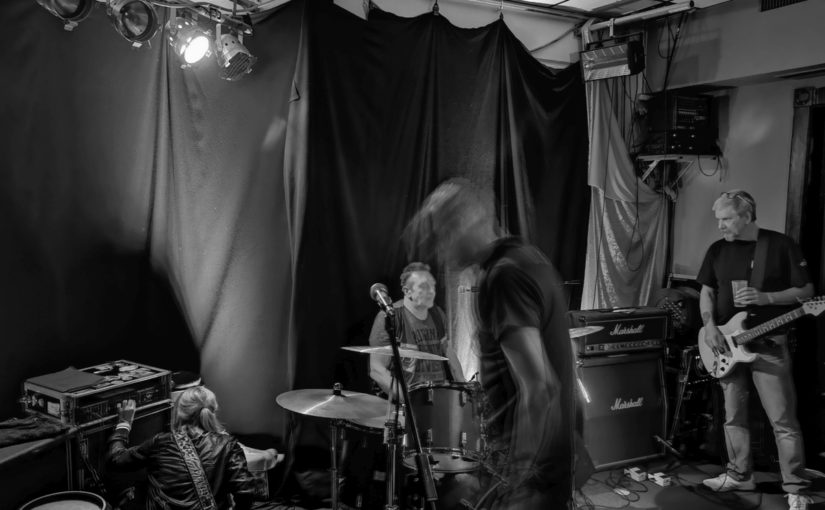 I missed the Razors show on the MS Claudia during the week due to the need to finish up with work (as two weeks off and some holidays were ahead of me and me love). I was though happy to the max that there was another occasion to see them: out and about in Wedel and for free. Paired with the fact that my old mate Rudi (now residing in sunny Perth) was still around and in attendance it was a show not to miss.

Getting there was easy (just hop on the S-Bahn at my local station in Altona-Altstadt) but long winded … all the way out to the posh West End, all the way beyond the city limits and actually into Schleswig-Holstein. Luckily the Musikvilla was just opposite the dead end train station, so no further hassle.

I came late and once completed a round of “hi there” went upstairs to the small room where the bands played … and missed a great set of Es War Mord. Damn!

Es War Mord really got a unique sound and i definitely regret that i did not show up on time. They sport some familiar faces from Berlin and their sound is best described as a dark and mellow E-Moll punk thunderstorm with some good variations on speed and singing style.

I was convinced after the 3 songs i did catch, i will now check out their longplayer “Unter Kannibalen“, please do the same!

Next Hamburgs finest, the Razors. Still with Christiane filling in for Old Erwin, who continues to battle ill health and got a lot of remote love from all around: Everybody was wishing him well!

In front of the stage were about 70 people and as someone mentioned in a side comment “… most of the Krawall 2000 contingent” (true, it was a well aged audience that just loves the songs and loves the band). And whilst it was largely a Razors following it was not short of support and dancing.

As ever the Razors paired new songs with their all time classics like this old Stones song (and their own ode towards the fans):

The sound was ok, the lights where not so ok and throughout the set i never got rid of the feeling of speeding, all songs seemed to be with a couple of rounds per minute added – i guess all with that sign above the bar in mind that the last train back into the city was to go at 01:03, something that nobody wanted to miss (as it would have resulted in either paying some hefty taxi far or having to choose the long winded Night Bus – easily more than an hour until you you would smell the city (and we are all city boys’n’girls))

Their songs go far back in time and this one is almost like a signature song – back then i thought of it as a cheap and badly constructed attempt for a sing-a-long but in hindsight (and hindsight comes always easy) that rather cheap style nowadays makes it worthwhile. It ain’t polished, it ain’t for the Radio and it ain’t for Spotify i guess – but it is for us:

Whatever – today and here, 2018, the Razors look back on 40 years of Punk fucking Rock and onto a lot of highs and a fair share of lows. But them and the Hamburg lot are by now glued together and just friends enjoying the music (and a beer or two). As ever, here is my loveliest song:

That bass line, that drum roll – that chorus! That is just the best sing-a-long and fists in the air song and it is one of the classic Hamburg punk 7″. Sure thing there are other hit records like The Buttocks EP’s (fun fact: Buttocks singer Mike was in the audience) but Tommies Gang is the one i would like bands to cover (now that is a great idea for a Razors Tribute Album: Bands providing their own retention of Tommies Gang!).

Fun fact two: The setlist was hand crafted errrr just a copy of the the last show at the Menschenzoo in Hamburg in July.

As noted the there was a bit of speeding, so in time for one last beer and the last train the Razors where done and a lot of the Hamburg lot resorted back to something last done 35 years ago: Travelling home on the last train together with parts of the band. Everybody was in a good mood and most where sufficiently loaded (as beer was cheap in Wedel).

Great night, loads of fun and the best: I got to see something new and that something new proved to be good. Though i stand by my standards: It is about seeing bands live and on stage, experience them and judge them only on that. And then get their records to support them!