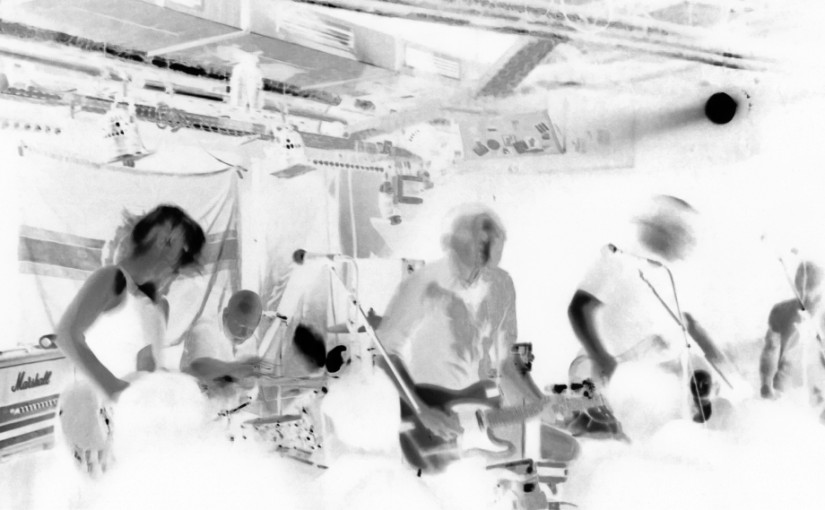 I do think people are just not thankful enough. I heard some folks moaning that they did not get a ticket for Get Lost! Fest III and i do not think that i sensed any appreciation of the effort that the good folks at Wild Wax Shows and Hafenklang put into such an event. I know running shows can be a sucker but herding 13 bands and getting them on time onto two stages must be next to a damn nightmare. And then just think ahead that they’ll do it at a venue where all people wanting tickets would get one. How big would that effort need to be?

The proceedings where kicked off on Friday at 21:07 downstairs and thus with a 7 minute delay. And delayed the audience was, as it was yet again a melting pot of musicians outside the Hafenklang. And, as one of me mates noted, the audience tends to get „more stylish“ every year – i bet you it is because it is a happy family event of some kinds of underground mu-sick industry.

First slot was for Teenage Hate from Altona, a young hardcore band that had to fight both an empty dance floor and the fact that their sound was just a wee bit off for the audience. They don’t have a record (as they where not tired to explain they started recording one but it petered out) but here a rather fine effort.

Next up upstairs was Martin Savage Gang, that is Martin Savage (Stockholm’s #1 garage rock entrepreneur) backed by Swizz Rockers Shady & The Vamp. Frank – boring 60s garage with nothing special. You really need to dig that niche, i don’t.

Back down it was The Achtungs from Finland and we where back in Get Lost! Fest territory – a strange band, from a strange country in search of weed and … strange rock. Go listen:

Not something i would sell my record collection for but they had something, incl. strange stage behavior. And people started to get agitated and enjoying it.

Next on upstairs again where Teledrome from Canda, a mate of mine noted „80 synthie retro“ and i thought „…oh fuck. What a waste will that be?“

Boy, little did i know. Great stage appearance: A centred vocalist (on synthie) who does not move. An agile tattooed girl on the right hand side with another synthie. A girl on the left hand side strumming it out. And a sturdy drummer. And a fucking driving wall of sound noise with pointed vocals.

I did double check their recordings on Bandcamp and they are tame, hence i would not be bothered with them normally. But on stage they killed. Surprise of Day One indeed! Well done!

Next on the bigger stake hard hitting Punk Rock with a capital R – from sunny Florida The Golden Pelicans.

In my native language it is down as „Schweinerock„, you will most likely call it Sleazepunkrock or something else. Loud, hard and with an enigmatic singer. Hard hitting and taking no fuckin‘ prisoners.

And that made way for the Headliner of Day One – The Red Dons. Eagerly awaited by a lot of people and the main stage looked down onto a packed house.

Great band, great instrumental intro and quite some nice songs. Sometimes they come across to me to lacking some edges but hey, that is my spoiled mu-sick-al mind i fear. The kids loved them and there was a lot of sing-a-long!


And that concluded Day one – good stuff but other than Teledrome nothing really exiting. But thanks to the settings (Up/Down and short breaks only) that was no spare time and thus no bore.

Kick Off for Day Two was at 20:02, almost on time. But for the Dirt Shakes (reformed for this occasion) it was tough: 6 people only upstairs upon kick-off.

They made the best out of it, blasted through their short set and where cheesy enough to point out „… you being here so early and in daylight shows that you are no rockers. Real rockers would come out later when it’s dark„. Well done lads!

First band downstairs and stripped of Martin Savage the lads from Luzern blasted through a so much better and tighter set – some of the songs i actually did like: Drive, hooks … though sometimes a wee bit too much guitar wanking. But definitely a force.

France next, on the smaller stage. Kaviar Special had a bit of Surf and Orient thrown into their songs that could make them special – but they did not cash in on it. So mixed for me in the end as also the vocals did not work out for me – a rather dull effort in my ears. Sorry friends.

Next on one of my favorites – Bäddat För Trubble from sunny Malmö. Best in class Sweden Punk Rock with a huge grounding in Ebba Grön or KSMB (at least for my ears). Lovely folks and most likely with the best ever bass player that graced the place: A Wu-Tang-Clan baseball cap, a Sodom T-Shirt and bad tattoos. Sturdy, never smiling and after every song a pointed „tak“. Lovely. They also had a stage show consisting of discussions amongst them and inviting folks from their large fan contingent to sing a song with them. Absolute brilliant and great songs too!

That was fun, though not necessarily typical „Get Lost!“ style of musick. But that is the beauty of these 2 days: You kinda know what you have to expect and what you get and then you taken slightly left-field. Just like at the record store where the cover sucks but you still give it a go – and it is a complete surprise.

And just like on Day One Teledrome upstairs did come out as a great surprise, it was Maniac on Day Two that go the crowed glued in front of the small stage.

They have served in various LA punk bands and i guess for the fun of it they are living out their Gentlemen Punk style in this outfit. A band with manners and a band that takes the stage in style: a drink, a joint toast and off it goes. I was too thrilled to take a video (damn me) but here is a sneak preview into their habits:

Now go and see them live and buy their records. Me mate Boffer did waste no time after the last chord! As much as everybody else by now was thrilled and in the mood for what could be dubbed as double headliners downstairs.

Dean Dirg where first and i am not sure but i think they did not play a show in something like 12 month. So people where super-duper eager to see them.

And boy, they just kicked it. Big time, no frills and with all their hits – which are cool short rants if you ask me. But sure figure out yourself …

or just sing-a-long to this one:

At the end they where done, spend, gone – choose your words – and sweaty. As much as the audience. Great show, to the point. And setting a mile high standard for The Hex Dispensers, who returned after Get Lost! Fest I to grace Get Lost! Fest III. And they sure expressed that they where humbled to return.

(and sorry for the initial hick-up and the end just into the 2nd song, i malfunctioned as i was so thrilled)

From the first song on this wall all hands on deck and the full crowd moving and singing a long. I don’t know how the band did feel but if i would have been up there i would have been speechless. And, by now it was already after 01:00 in the night, so for many people already more than 5 hours of mu-sick and booze.

They took the stage, they played, they ruled. With style and smile. And all of that ended at about 02:00 with just another encore and a fully exhausted band as much as a fully exhausted and by now already a wee bit smaller sized audience. The Hex Dispensers had nothing more to give – just their T-Shirts and records. So with this one the Get Lost! Fest II did end:

2 Days, 13 bands, 10 hours up/down at the Hafenklang and sure countless hours of effort by those who made it possible. And i did not even take in the night show with Hamburgs own Kücken nor the Saturdays afternoon at the Molotov. But i am more than happy to let go any open air festival and efforts like the Reeperbahn Festival.

I am in it for Get Lost! Fest IV! And for those who complained? Get your ass up and make an effort to be there. It might take that you need to get tickets early – why not try that one?

For me that weekend did end quite some stress – a week out and over the big pond working in Houston, then a full workweek at home with some jet lag and finishing it off with Get Lost! Fest III and being home late (and with some beers). So this rant is written out in nowhere on Sjaelands Odde, 10 days of nothing but seaside view with me love.

That will get me back into the mood for mu-sick, live and loud. Bring it on Wild Wax Show and Hafenklang – you are running something special there!