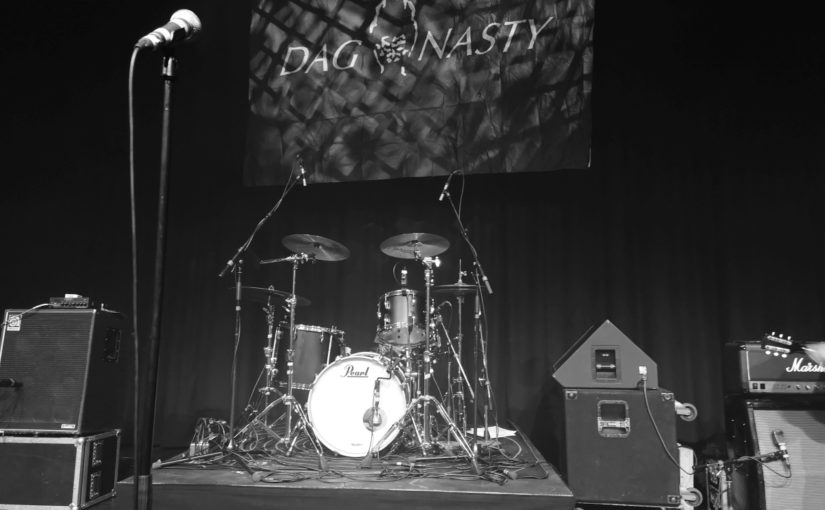 As i have not done this for a shitload of years i felt an uncontrollable urge to go back to away game circuit when it comes to shows. Actually being located in beautiful Hamburg makes you lazy as it gives you unlimited advantage of many clubs and many shows, as eventually most of the travelling bands hit our shores.

Not so Dag Nasty on this short burst into Europe and as such the Punk Rock Hamburg connoisseurs took on an away trip thanks to me mate TKO, who provided some group ticket matching service via email.

2/3 of the Hamburg lot took the train from Hamburg and safely arrived ahead of time in Bremen. To my surprise noise levels during the ride where moderate and alcohol consumption secretive. What surprised me most was the sheer fact that our group tickets (giving every member a damn cheap 8€ ride back and forth) where actually never checked.

At Bremen central station we where not only greeted by masses of people attending the local fun fair (at different levels of enjoyment and drunkenness) but also the local football team made an effort of pissing off the black-white-n-blue part of our troops. We did let go the fun fair and circumvented the area to get to the Schlachthof. It was supposed to be an early show, so a quick beer outside and then into the club.

It was fond memories for me, in the 80’s i saw a number of shows there,  including the great Bremen vs. Hamburg fight show (aka Bad Brains 1983), the first Toy Dolls tour (bypassing Hamburg) and a large number of smaller shows at other places in Bremen eg. Buchstraße. The place now looks much more shiny, much more polished and technically up to date.

What has not changed is the rather large stage (in terms of width) that is fronted by a too small dancing area before the ascent of the terraces happens – something that was to hit one of the Hamburg lot later (but luckily he was back home ok after an ER medical intervention).

On time and way too early Fights & Fires from sunny Worcester (UK) took the stage and played towards no more than 100 people i guess. If you are a regular reader then look at the pics and guess my view…

… indeed to much facial hair and too much long hair. The mu-sick to me was exactly that type of music that can’t choose what it wants to be. The way it was done was very professional, good sound, good breaks, on time leads etc – all to the  point that it felt more professional than say … human. Or natural.

Someone next to me tucked a lable „Nu-Metal“ on them, no clue what cupboard that comes from but it somehow seems to sum it up. Not really a perfect match with Dag Nasty and nothing that meant a thing to me (but as ever, you need to see all bands because there may be surprises).

Go and check them out for you dare.

Next on Dag Nasty and by now we had maybe 250 people in attendance – hard for me to guess. About 50+ folks where from Hamburg but still in total a way too small number for such a great band. And a great band they are: Brian, Shawn, Colin and Roger are back at where Dag Nasty started in 1985 and are less the polished and pop infused one they graduated to later (which, as a matter of fact, i still dig too).

They took the stage and from the first chord they took the audience with them. Loads of energy, loads of great songs and all of that done with precision (rather than pure professionalism). The lot loved it and and the Hamburg lot took on to crowd the dance floor (and specifically the two Teams N&N – both a female and male outfit – outsmarted the rest).

I stood directly at the stage and had more of Shawn and Brian, actually more of Brians guitar. Sound wise it overshadowed a bit the rest but that was because the PA was basically way left & right and behind me. Never mind, i knew all songs anyway and enjoyed singing them.

At the end all of the audience sang a „Happy Birthday“ for Roger and we got a couple of encores.

Great show, great band and as someone from Bremen pointed out after the show „…the show has been rescued by the Hamburg lot“ (which is in nice contrast to the early 80s where the Hamburg lot away tended to ruin shows). A lot of happy faces though a very tough local club: People where forced out instead of being allowed a few more beers.

For us on the train it meant back to the station, grabbing some drinks and food and taking a very early 23:15 train home. And with a descent rebel attitude we ignored the signs of order and at least had a couple of drinks on the train.

Back home in Hamburg some actually made it quickly down to the Moltow to catch the encore of Defekt Defekt, so those won the double crown that day.

For me it was a great away trip: Great people around me, enthusiastic support for the band and smooth travel back. Just a perfect way to enjoy perfect music.