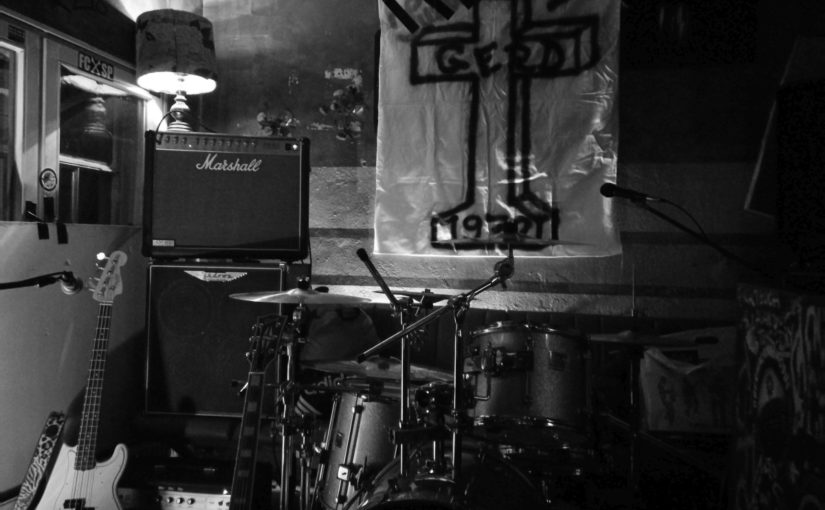 Out of the approximately 75 people at the Monkeys the evening before a large contingent also had tickets for Gerd, who sold out the Cafe Treibeis just around the corner of the Monkeys in record time. Against their stadium tours this was a small event but it was a „Thank You“ for the called off Christmas show last year.

And Gerd being Gerd spared no cost and efforts to create a home for the lot: Special DIY tickets, a massive stage, new amps and cabinets and a light rig that would have made the Queen Mary II shine. Or glow. A bit. A little bit.

And the Gerd fanatics almost had a premature ejaculation upon spying the set list – within the 39 songs for the two hour set where some new gems: Gerd finally got a settlement with the estate of the late Lemmy and are now allowed to play their signature song G.E.R.D. on #25 (that Lemmy took for a bottle of JD’s in a moment of disunion by Gerd and transformed  towards is own ode to that NYC brothers Ramone).

Sharp at 20:00 the Gerd ship took sail towards a packed Treibeis, bulkhead doors where glued shut and no-one was to escape. The proprietors of the Treibeis had stocked enough booze and the lot was yet again in happy mode.

OK, there was some shortcoming: The light somehow malfunctioned and left everything in the dark. Literally. And because the ship took sail in storm mode and everything was shut there was little to no air coming in. And the booze was too cheap and i guess you can imagine what cheap booze does to thirsty, wind and sun withered sailors!

And whilst half way into the harbor a mutiny occurred,  some of the shanghaied contingent where actually literate (and could perform computations) and made out that some songs had been skipped. Scandal! Money back! Just before Nessy was keelhauled Gerd took the wind out of the sails of these folks and re-arranged to play the missed ones.

And just within the 2 hour mark they finally made it port side with a song that someone in the know had on his shirt:

And that was a tight landing, the port had to shut down at 22:00 sharp!

Was the lot happy? As you can see below the lot was utmost happy…

That was a worthy effort by Gerd and that they still find the time to check back home during all their global travel is much appreciated.

Next stop of the Gerd world tour is the big stage of the Knust and you can be damn sure that the little S.U.P.P.O.R.T. actually translates to a fucking big surprise. Be there or be square!

For me and 5 others it meant setting sail towards the Molotow in pursuit if the triple crown – more punk fucking rock awaiting us after midnight.