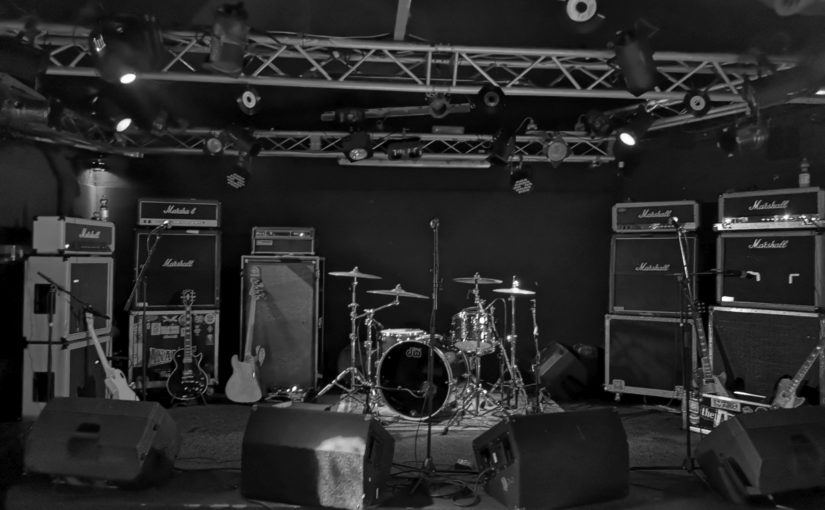 This July is a very busy July for shows in Hamburg, almost every day there is a show worth considering and for me it is about every other day that i plan to attend … much higher frequency than normally for me. On a warm and sunny Friday it was time for Bonecrusher at the Monkeys and for some hope that more people would attend than last time round, where it was a very lonely Sunday.

Support was for The Analogs from Poland and i had no clue about them: Neither that they existed nor how they sound. But that is the good thing if you go out into a club – you get to see something new every once in a while. Just be open for that!

They are around for some time, since 1995 according to a rather funny Wikipedia entry, and they are a recognized Street Punk Legend in Poland. They mu-sick-al style ventures a lot into what i would call rock but never on the boring side. The one item that did stand out was that they like their songs long and complex, i guess none was shorter than 4 minutes.

I captured what felt the longest one, in order to put it here i had to tone down the quality to reduce hosting size. But hear yerself:

They were tight, together and well rehearsed and many people in the audience seemed to dig them (besides their polish fans i noted a couple of locals smiling away and getting some merch after the show).

Next on Bonecrusher, that hard working working class outfit that does not need a lot to be ready: They took the stage, they adjusted little bits and off they took.  Off went also the shirt by one member of the audience, a moment some feared. This time round he annoyed again but got some push back from some of the audience. His own fun did not impact the fun of others that much, still at moments yet again it was at the brink of a non-verbal communication.

Bonecrusher provided a neat and complete set of old and new material and delivered their set as a well oiled engine. Both guitars celebrate a near perfect sound and bass/drums provide the solid pushing backdrop it needs. And Michael takes the front, engages the audience and delivers the message. And what they do not have is even a scent of a gap between „on stage“ and „off stage“.

Just perfect if you ask me. The only item that did make me unhappy was not the shirtless contingent but the fact that despite more people attending compared to last time round it was still more „half empty“ than „half full“. I keep my fingers crossed for the next time and hope that Mike and Co choose weeks off work that – at least in Hamburg – gives them a slot without any competition left or right of that date. They deserve it.

I took a final beer and plundered the merch stall, as Bonecrusher had the perfect item in stock: A Polo Shirt. The friendly lady handed me one labeled as „3XL“ and i complaint that i would not need a tent. She said „honey, it comes out much smaller, that’ll do for you„. Little did i know until next day when i realized it compares to M and my six pack (and my wide shoulders) won’t fit ever.

Mike – that’s the only customer complaint! 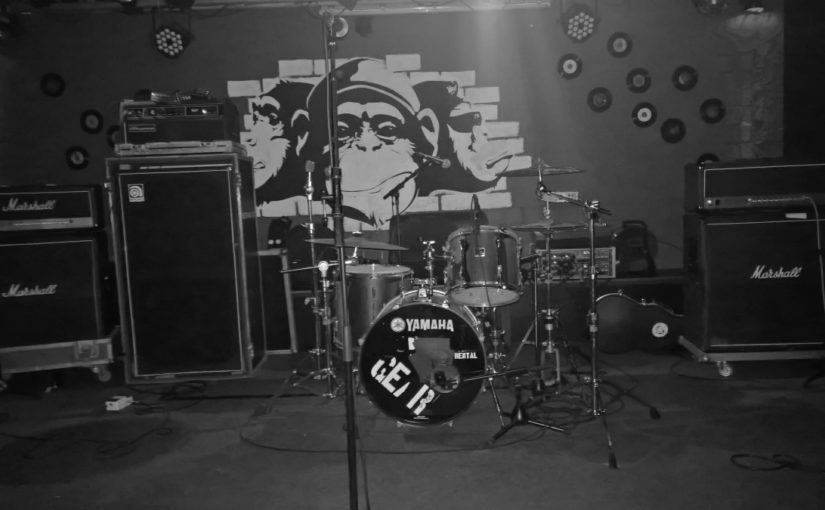 That was destined to be a tough Monday: First FCSP DFB-Cup away game at the Monkeys Pub, then 3 bands on a Monday evening. The we go out in round one of the cup vs. a lower league team is also destiny and so it happened. A very frustrating game and not the best entry into the proceedings.

First on The Sideburns from Sankt Petersburg and the young lads had the tough support the support spot and faced … an empty club at 20:45 with 12 people in front of the stage and some where friends of the bands. Tough.

And much to my surprise they blasted straight forward Skinhead Rock’n’Roll without to much humpty-bumpy: Actually they delivered quite a fine set and had definitely some mu-sick-al abilities.

Really sad that it was Monday and it was early. And that it was August, the month of Blackpool, pre- and post-Blackpool and general overkill on live music. A couple of more folks came later but it did not change the impression of a rather empty show, much to my frustration.

Next on The Welch Boys from sunny Boston and me mate went as far as pointing out that they are at a space where the Dropkick Murphys left it after the first LP. I am not sure on that one but sure thing they come with melody, chorus, hocks and great sing-a-long.

But also for them it must have been sheer frustration to play a rather empty space in front of the stage though initially they seem to put everything into it. And they have a great rooster of songs and a band that has a hockey themed record cover can’t be bad at all. Here they are gently covering The Who:

I’d love to see them in a packed Monkey, people high on Guinness, Monkeys Red or Cider and everybody moving and singing along. I think they would deserve that setting and then they would not just shut down as i had the feeling towards the end of their set.

I do share their frustration but that is sometimes the hardship of touring. You hit a town on the wrong day and after the potential audience already had a weekend full of live music under their belt and just choose to let go this opportunity. It is actually the F.U.’s who can claim that one on me, as i did not have the energy to see them on Sunday and make it three days in a row to be out.

An then it was time for Bonecrusher, eagerly awaited by i guess 50 odd people. And they kicked off like this:

And being kick-ass working class they did not care about how many people where there but just took off to deliver what the fans asked for: Hit by hit by hit and then some more. They were tight, together and well rehearsed and just gave a full on!

By now i guess everybody has accustomed to Bonecrusher being fronted by a different face and i hear a couple of folks mention something along the lines of „he just fits perfect“. And guess what? Folks where right.

What was even more stunning was the fact that they just did not stop, did not let go and pushed forward. And they crowned their performance with a heavy heavy interlude of two-gun duel of the guitars, inclusive of some stunning guitar wanking solos.

Wow, that indeed was kick-ass! They played until midnight and then did send people home, quite a few took advantage of the well stocked merch table from actually all three bands – mine sure thing was a Bonecrusher shirt for me love.

And whilst cup and low turnout where frustrating we were greeted outside by a stunningly calm and warm summer night (Hamburg did not have a lot of these) and i could enjoy a gentle bike ride home.

I do hope next time round the bands a re more lucky on the date and the turnout – they and the club deserve it! 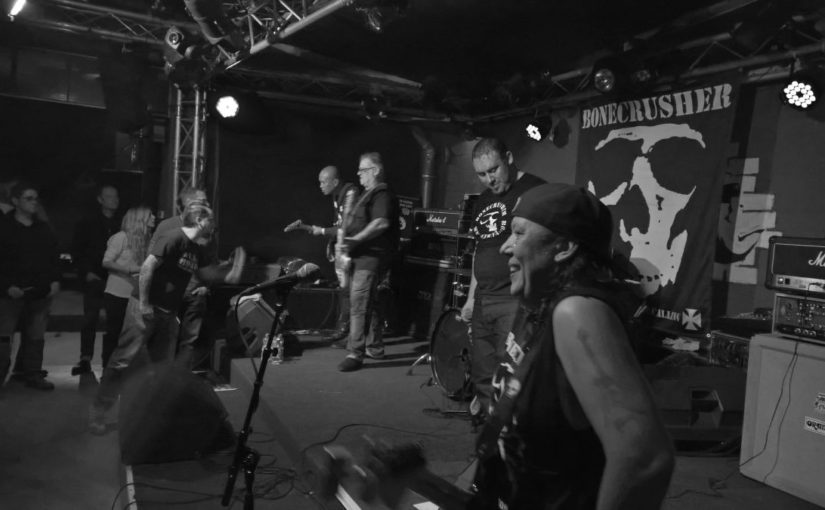 It is quite neat to have moved house into the vicinity of my favourite clubs, thus the Monkeys is only a short bike ride away and can now be frequented also on a wet and rather dire Sunday evening. Me and me mate from around the corner came late and the first band was already on stage.

OK, that is a tough one now. I simply could dislike them because they are from near Bremen (a much too easy feel for anybody in Hamburg) but i do appreciate bands that go out and play – but them bands also need to appreciate that i need to be able to relate to their sound to like them.

And DYD where anything but my liking.  Why? The sound was „Metalcore“ and everything on stage looked orchestrated and copied from a number of US bands that play in the same way, look the same way and act the same way. By the looks of it i am not alone with my gut feel.

They provided the back line for Bonecrusher though, so at least one positive thing. And sure hey suffered the fate of many support acts, 12 people in front of the stage to see them – the rest talking and boozing in the pub.

Next on Bonecrusher, sans Ray though, and they kicked of like this:

From the first song full assault and actually a great sound. Hard hitting, bellowed vocals and quite some great guitar work. Working Class Rock some claim, Oi! some other and the overall they end up in the Street Punk cupboard in most record shops. Whatever you think – go listen and you will see that they have found and nurtured their own style and stick to it.

The one thing that made it feel somehow different was that it was sans Raybo and thus sans some danger. But maybe that is for the better, the last things i heard (damn Internet, source of all sorts of rumours) was that the 2014 Tour was cancelled as he was in Prison (i’ll take that as truth) and that since then he has gone apeshit on drugs (a whisper said „Crystal Meth“, not sure about that part) and just ain’t no more fit for the band. Or something to that extend.

They interacted well with the audience and singer Michael spend most of the time off stage and in the pit. In addition they blasted through their set as a means to ensure we all get home early, as we all have to work on Monday morning. And true that is and thus real respect to people who come out on a rainy Sunday night.

And whilst at it, they relocated into the pit and left their drummer behind to storm into the encore taking everyone as prisoners with them onto the plank:

Just perfect i’d say – they should have deserved a good 100 folks more (on a Friday evening)! But they where happy and thankful, something that the audience did happily return.

And my alarm clock? Went of at 06:15 in the morning and i switched it back to 08:00 to enjoy some more sleep – work can wait sometimes (and i am not really working class when it comes the role i play in the big corporation that pays the bills). Never mind – a big thanks to Bonecrusher, now make sure you come back in time!