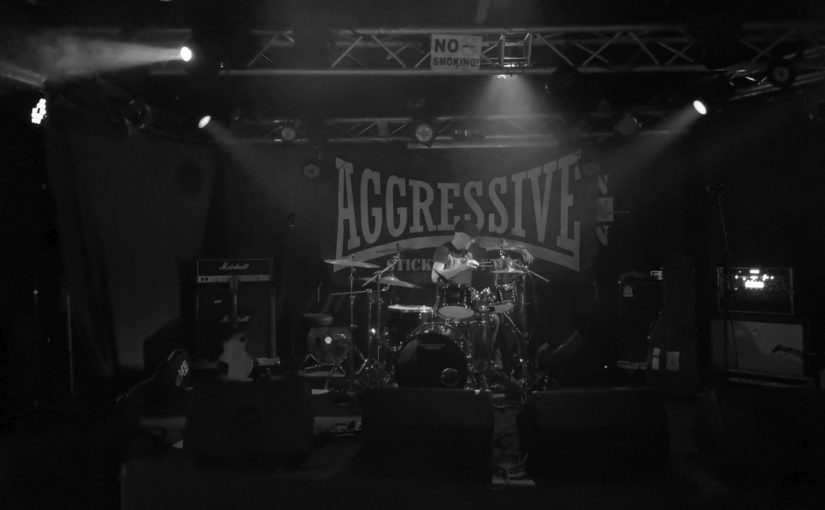 I guess it was the headliner that lured folks on a rather warm Wednesday to the Monkeys, against competition from the Guitar Gangsters at the Hafenklang. Alternate Action are fronted by Greg of Bishops Green fame and thus people knew they would get an in yer face show.

For myself i have to admit that i was rather attracted by what would be the first (and early – some people missed them) band on stage: Knock Off from that island yonder (that want’s to split away but can’t decide on how).

They planted themselves into my ears (and me heart) with this beauty:

Whenever i hear this song there are tears in my eyes as it reminds me of a friend who’s heart gave way too – the first time he recovered, the 2nd time he lost the battle. He is gravely missed and he remains in our collective memory – so to him you shall sing-a-long…

But it ain’t all sad, whilst enjoying their set i got the good news that they shall return later this year to Hamburg, onto a bigger stage and a larger audience – i am looking forward to that year end fun eagerly now!

They pride themselves „as an onslaught of energy, with hard and fast songs alongside anthems with stick in your head choruses.“ and indeed that is what these three lads deliver.

Whilst lightning or showcasing was not their thing it became very apparent that what sounds like simple songs from the outside is rather clustered all over with brilliant songwriting. Just listen carefully, there are some real gem chords, guitar work and singing.

Good news was my fave song came early and it sounded like this:

Great stuff, delivered unpretentious but unfortunately to a much too low number of people in front of the stage (due to the rather early start). I was there but some mates came later and missed it.  Bad luck my friends, you missed a great set.

And according to my own rules (set to limit the extend of my record collection) of only buying vinyl once a band has persuaded me on stage i got Knock Off Vinyl and gear after the show. Try them yerself mate – you will not be disappointed!

Talking about disappointment provides a neat roll forward to the next band taking the stage: Aggressive from the sunny Ruhrpott. 5 distinct different folks on stage …

…. and just not getting me. Neither sound nor presentation. One of me mates noted „… a bit early to see the worst band 2019 already in April“ but i take that is an unfair comment. I do respect anyone who get’s up there and performs but if it does not work for me it just does not work.

By now the Monkeys was well filled for a Wednesday and people eagerly awaited Alternate Action. Formed a while ago (i think 2005) and with a more than 10 year hiatus they left behind only a small output. Still they hold still a bit of a status  most likely because they where and are fronted by Greg, who went to fame with The Lancasters and Bishops Green.

That bass player looked familiar, it took some time for me to realize that he also takes duties with the Suede Razors. Just like Knock Off unpretentious stuff with Greg putting the needed bit of danger, anger and starring in.

I have none of their vinyl and only knew a limited number of songs but all in all they did surprise me. Sure the vocals stand out but the rest is also pure enjoyment: Some great hooks, some breaks and a sturdy backline.

Alternate Action had the space in front of the stage packed and the (rather) male contingent dancing. Loads of people had some silent smiles on their face, others did sing-a-long loud. I think Hamburg indeed was sold on Alternate Action and i am damn sure that we will see a triumphant return in the near future.

If i understood it right this setup of Alternate Action will hit the studio next and will surprise us with a new record. If you look for the old stuff then take up the „Thin Line“ LP, a collection of old stuff and unreleased beauties.

3 bands, lot’s of good chats, one hard memory and all-in-all a worthwhile Wednesday at one of my favorite places. Life is good to me and #thereaintnuthingbetterthanlivemusic so thanks to those who make it happen!