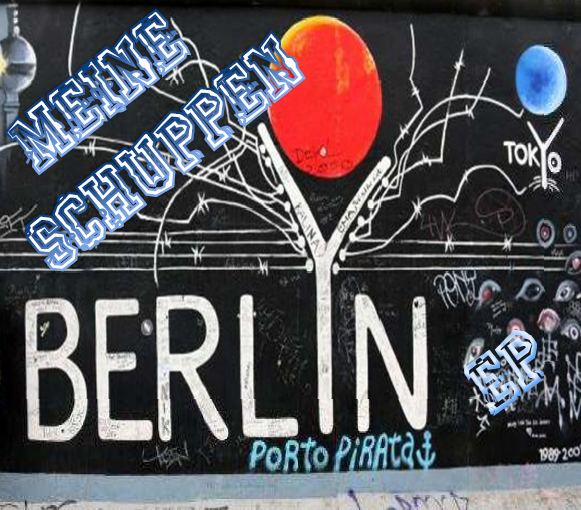 It’s not any longer a big secret, that ‘Meine Schuppen’ (one of Germany’s finest fun punk bands) are proud to be back again. After more than 30 years of hibernation, they brought us first their 6 track Hamburg EP, which was full of fun and action about their beloved hometown.

Now they continue to amaze with old and almost forgotten stories, anecdotes and unsung fables, when they take on the capital Berlin in their newest 6 song release.

The songs are slightly more modern punk sounding, compared to the ‘oldschool rock’n’roll punk’ of the previous EP. But the themes are very much alike and likeable, when they sing about further riots, road trips, town visits, punch up’s, hardcore kids, and the usual stuff what happens on punk shows etc.

Coming not from Berlin themselves, of course they view the town from a visitors point of perspective and refer mostly to events they’ve took part when visiting, or sing about friends and people they know in the capital. This explains the rework and the altered lyrics of Ideal’s ‘Berlin’, the only cover song on the EP:

One exception is ‘Kreuzberg gegen Tempo’, as they revive some old events around the band Tempo at the 3rd Punk Festival in the Markthalle, Hamburg, in 1979 where some unfriendly Berlin Punks kicked the band from their hometown off the stage:

That said, the song ‘Wizo sind die Ärzte keene Terrorgruppe’ has at first glance only the title related to Berlin. The lyrics are more about people, who are constantly whinging about those Bands, who after years and years of touring finally made it big:

It’s just too easy to now call them ‘not punk’ or just to hate them for the fact, that they have been just that little bit better, longer around, more professional or even luckier than the most kids with their bands which started just a few days ago. They mention only 3 known bands from Berlin, but you probably can put Die Toten Hosen, Abstürzende Brieftauben, Killerpilze, Die Goldenen Zitronen and ZSK also in that pot of bands, which the casual punk hates for having a bit of (or in some case major) success.

They also pay a tribute to the largest punk radio station in Berlin:

It quite astonishing that a band like SCHUPPEN 2000, who enjoy airplay around the world big time, pays homage to that large station – would it not be the other way around normally?

The next one is a tribute to one of Rudi’s own trips to Berlin, the beauty of hitch-hiking a trip and crashing at a fellow member of the punk rock fanzine elite:

Last but not least SCHUPPEN 2000 do provide a trip down memory lane – this is a reminiscence to a mid-80’s show of Missing the Scene (Meine Schuppen successor and as such SCHUPPEN 2000 predecessor, but by now Meine Schuppen are in succession anyway) and the dislike of the Metalcore scene back then:

Looking at the cover, the band seemed to have made some changes also in the personal line-up, which might explain the different sound and musical style to their previous release. By the looks of it Rudi has now surrounded him with trusted and experienced musicians, rather then relying on old friends and the need to cover his police record.

All songs are recorded as usual, in the famous GARD HAAR STUDIO in 2015 and mixed by a guy who calls himself Grobi and who happens to be from Berlin himself. Now how about that?

Rudi has been busy down under, SCHUPPEN 2000 unleashed their newest video on the infamous Pöseldorf riots:

YO! This is blog entry #500 and it is maximum pleasure to present to you the latest and greatest of Meine Schuppen, thought long gone since their 1986 classic vinyl release under the moniker “Missing The Scene”.

The non-success of Meine Schuppen made Rudi leave Hamburg and to never come back (musically). But also far away from his hometown and his punk rock youth he is still full of fond memories. Being restless since S.S.A. called it a day he has assembled a new lot down under in Perth and is now pushing out new songs, all centered around Hamburg. Sure thing his old pals from Hamburg where replaced with young talent, though Schmidtpeter of Funzine fame made the long haul down to Perth to help out. And the result? A perfect ode to Hamburg and yet again a full set of hits!

First off a big nod to Hamburg as the punk rock capital of Germany:

Next comes a song that memorizes the yearly pilgrimage of the Hamburg Oldpunks to Blackpool for the Rebellion Festival:

And more memories of an infamous riot show at the Markthalle – the ill-fated Toy Dolls show in 1985 that started with the Skins having a heyday and ended with punks and left-wing activists using blunt instruments on every shaved head:

And more riot memories, this time the famous Pöseldorf Riots of 1980:

But Meine Schuppen are not fixed on old riots – they also give a detailed account of what Hamburg was like, back then, at night:

And the finish off in style with an ode to where we did spend the days back then – in the Karoviertel!

And that finished off this effort. It has more speed, it is more heavy but it is still something full of love: Love to Hamburg, love tp punk rock and love to fond memories. And thus we love it too and every other year when Rudi can afford the trip to Europe we are happy to have him. In Blackpool. In Hamburg.

And 2015 he will be selling the Hamburg EP when he is over, so make an effort to grab a copy! For those who can not wait, just download the songs right here (using “right click” with your mouse and “save as”). Burn it yerself in full DIY fashion and use this cover for the CD Tray: Meine Schuppen – Hamburg ep

And, whilst at it, here are some pictures from the 1985 line up:

The jury is still out if there will be a limited, colored vinyl only, release on Holy War Records. It pretty much depends on the financials, i swear! But let’S see – time being a big FANX to Rudi and SCHUPPEN 2000 down under in Perth for flying the Hamburg flag so big, so proud! See ya soon!

nb: Rumor has it that Rudi did avoid Hamburg for so many years as his old punk pal U. Haft became a police officer and had a warrant on him. If i am not mistaken U. Haft has retired at the age of 56 from the Hamburg Police last year and with him hopefully that old file went forever. Good luck, Rudi!